Professor David Ray Griffin is the nemesis of the official 9/11 conspiracy theory. In his latest book, Debunking 9/11 Debunking, Griffin destroys the credibility of the National Institute of Standards and Technology (NIST) and Popular Mechanics reports, annihilates his critics, and proves himself to be a better scientist and engineer than the defenders of the official story.

Griffin’s book is 385 pages divided into four chapters and containing 1,209 footnotes. Without question, the book is the most thorough presentation and examination of all known facts about the 9/11 attacks. Griffin is a person who is sensitive to evidence, logic, and scientific reasoning. There is no counterpart on the official side of the story who is as fully informed on all aspects of the attacks as Griffin.

At the outset, Griffin points out that the reader’s choice is between two conspiracy theories: One is that Muslim fanatics, who were not qualified to fly airplanes, defeated the security apparatus of the US and succeeded in three out of four attacks using passenger jets as weapons. The other is that security failed across the board, not merely partially but totally, because of complicity of some part of the US government.

Griffin points out that there has been no independent investigation of 9/11. What we have are a report by a political commission headed by Bush administration factotum Philip Zelikow, a NIST report produced by the Bush administration’s Department of Commerce, and a journalistic account produced by Popular Mechanics. Various scientists who work for the federal government or are dependent on government grants have issued speculative statements in behalf of the official conspiracy theory, but have not produced meaningful evidence in its behalf.

The relevant skeptics of the official story are approximately 100 independent researchers consisting of experts and professors whose careers have required them to deal with evidence and its analysis. Their individual contributions to 9/11 analysis can be found online.

Everyone who believes in the integrity of the US government or the Bush administration will find Griffin’s book to be disturbing. Readers will have to confront such issues as why US authorities seized the forensic evidence resulting from the destruction of the three World Trade Center buildings, the attack on the Pentagon and the crashed airliner in Pennsylvania and prevented any forensic examination of any part of the 9/11 attacks.

Despite widespread belief that Osama bin Laden was responsible for the attack, the evidence we have is a suspect video declared to be "bogus" by Bruce Lawrence, perhaps the leading American expert on bin Laden. The US government has never produced the promised report on bin Laden’s responsibility. When the Taliban offered to hand over bin Laden on presentation of evidence, the US government had no evidence to deliver; thus the invasion of Afghanistan.

The fragility of the NIST report is astonishing. The report succeeded because people accepted its assurances without examination.

Griffin shows that the Popular Mechanics report consists of special pleading, circular reasoning, appeals to the authority of the NIST report, straw men, and internal contradictions in the report itself.

There is not space in a review to present the evidence Griffin has mustered. A few highlights should suffice to alert readers to the possibility that the Bush administration has lied about more than Saddam Hussein’s weapons of mass destruction.

The two WTC towers did not collapse. They blew up and disintegrated, as did WTC 7. There is an enormous energy deficit in every account that rules out the use of explosives. Gravitational energy is insufficient to explain the pulverization of the buildings and contents and the severing of the 47 massive center core steel columns in each of the towers into convenient lengths to be picked up and loaded onto trucks; much less can gravitational energy account for the pulverization of the top floors of the towers and ejection of steel beams hundreds of feet horizontally just prior to the disintegration of the floors below.

Damage caused by airliners and short-lived limited fires cannot explain the disintegration of the buildings. The massive steel skeletons of the towers comprised a gigantic heat sink that wicked away whatever heat the limited fires produced.

NIST’s final report stated that of the steel available to it for examination, "only three columns had evidence that the steel reached temperatures above 250 degrees Celsius" (482 degrees Fahrenheit). The self-cleaning ovens in our home kitchens reach temperatures higher than this, and the ovens do not melt or deform.

Steel begins to melt at 1,500 degrees C or 2,800 degrees F. Temperatures of 250 degrees C would have no effect on the strength of steel. The explanation that the buildings collapsed because fire weakened the steel is speculative. Open air fires do not produce temperatures sufficient to deprive steel of its structural integrity. Steel framed buildings have burned 22 hours in raging infernos, and the steel skeletons remained standing. The WTC fires in the towers lasted about one hour and were limited to a few floors. Moreover, it is impossible for fire to account for the sudden, total and symmetrical disintegration of powerfully constructed buildings, much less at free fall speeds that are obtainable only with controlled demolition.

Griffin provides quotes from firefighters, police, and tenants, who heard and experienced a series of explosions prior to the disintegration of the towers. Such witness testimony is generally ignored by defenders of the official conspiracy theory.

Molten steel was found in underground levels of the WTC buildings weeks after the buildings’ destruction. As everyone agrees that the fires did not approach the melting point of steel, a possible explanation is high explosives used in demolitions that produce 5,000 degree temperatures. The possibility that explosives were used remains unexamined except by independent researchers.

Contradictions in the official conspiracy theory leap off the pages and hit the reader in the face. For example, the evidence that Flight 77, a Boeing 757, crashed into the Pentagon is the government’s claim to have obtained from the wreckage enough bodies and body parts to match the DNA for each person on the passenger list and flight crew. Simultaneously, the absence of passenger luggage, fuselage, wing and tail sections--indeed the absence of a 100,000 pound airliner--is attributed to the vaporization of the airplane due to the high speed crash and intense fire. The incompatibility of vaporized metal but recovered flesh and blood stood unnoticed until Griffin pointed it out.

Another striking inconsistency in the official conspiracy theory is the difference in the impact of airliners on the Pentagon and the WTC towers. In the case of the Pentagon, the emphasis is on why the airliner caused so little damage to the building. In the case of the WTC towers, the emphasis is why the airliners caused so much damage.

Perhaps it is merely a coincidence that just prior to 9/11 Cathleen P. Black, who has family connections to the CIA and Pentagon and is president of Hearst Magazines, the owner of Popular Mechanics, fired the magazine’s editor-in-chief and several senior veteran staff members and installed James B. Meigs and Benjamin Chertoff, a cousin of Bush administration factotum Michael Chertoff. It was Meigs and Benjamin Chertoff who produced the Popular Mechanics report that Griffin has eviscerated.

In his conclusion Griffin reminds us that the 9/11 attack has been used to start wars in Afghanistan and Iraq, to plan an attack on Iran, to curtail constitutional protections and civil liberties in the US, to radically expand US military budgets and the power of the executive, and to enrich entrenched vested interests. Griffin is definitely correct about this regardless of whether a believable case can ever be made for the government’s version of the 9/11 conspiracy.

Paul Craig Roberts was Assistant Secretary of the Treasury in the Reagan Administration. He is the author of Supply-Side Revolution : An Insider's Account of Policymaking in Washington; Alienation and the Soviet Economy and Meltdown: Inside the Soviet Economy, and is the co-author with Lawrence M. Stratton of The Tyranny of Good Intentions : How Prosecutors and Bureaucrats Are Trampling the Constitution in the Name of Justice. Click here for Peter Brimelow’s Forbes Magazine interview with Roberts about the recent epidemic of prosecutorial misconduct.

Posted by Shoestring at 03:52 No comments: 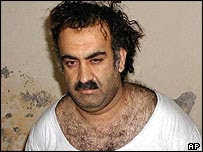 According to news reports, alleged al-Qaeda "mastermind" Khalid Sheikh Mohammed has now confessed to having planned the 9/11 attacks. Last Saturday (March 10), he supposedly told a tribunal panel of three military officers and a government-provided representative: "I was responsible for the 9/11 operation, from A to Z. I was the operational director for Sheikh Osama bin Laden for the organising, planning, follow-up and execution of the 9/11 operation." This was not all. In fact, he supposedly confessed (though not under oath) to involvement in a total of 31 attacks or planned attacks, including the 1993 WTC bombing and the 2002 Bali bombing.

However, there is one rather large problem with this story: Khalid Sheikh Mohammed was reportedly killed on September 11, 2002, during an hours-long shootout with Pakistani security forces. Intelligence officials had supposedly tracked him down to an apartment in the southern part of Karachi. FBI and Pakistani ISI officials then surrounded the building, and were joined by hundreds of police vehicles and Pakistan Rangers.

The subsequent sequence of events that culminated in Mohammed's death has been reconstructed by the Asia Times Online, based upon reports from the Pakistani media, supplemented by information from intelligence sources.

Plain clothed officials had entered the building, and urged the people inside to evacuate. But a hand grenade was thrown, injuring two of them and forcing them to retreat. Troops then entered the building and a fierce gun battle ensued. Eleven suspected terrorists were captured and two were killed. After examining the two dead bodies, a female FBI official reportedly exclaimed: "You have killed Khalid Sheikh Mohammad." She then ordered that one of his fingers be cut off and taken away, presumably for DNA testing.

Mohammed's wife and child were taken away to an ISI safe house, where they identified one of the dead bodies as being that of Khalid Sheikh Mohammed. After being kept in a private NGO mortuary for 20 days, it was buried in a graveyard in Karachi, under the surveillance of the FBI. However, according to the Asia Times Online, "News of the death of Khalid Sheikh Mohammed was intentionally suppressed so that officials could play on the power of his name to follow up leads and contacts."

Then, six months later, Mohammed apparently returned to life, and was reported as having been arrested in Rawalpindi. After spending time in secret CIA prisons, he was moved last year to Guantánamo Bay. He is understood to have been tortured while in U.S. custody, including undergoing "waterboarding."

So what is the truth? Has the "9/11 mastermind" really confessed to his crimes? Or does the U.S. simply have some unfortunate guy of unknown identity in its custody, and they have tortured him into confessing that he is Khalid Sheikh Mohammed, and that he was the mastermind of 9/11?