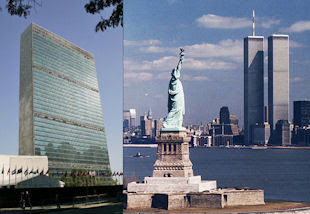 The North American Aerospace Defense Command (NORAD) held a major training exercise in October 2000 that included the scenario of a person stealing a large jet plane, which they planned to crash into the United Nations headquarters building--a 39-story high-rise in New York, just a few miles away from the World Trade Center. Furthermore, a NORAD exercise in June that year included one scenario in which a plane was hijacked with the intention of crashing it into the White House, and another in which a transcontinental flight was hijacked with the intention of crashing the plane into the Statue of Liberty, only a short distance from where the WTC stood.

The existence of these exercise scenarios was revealed in August 2004 by General Richard Myers, at that time the chairman of the Joint Chiefs of Staff, during a hearing of the Senate Armed Services Committee. Senator Mark Dayton (D-MN) asked, "Did NORAD"-- the military organization responsible for defending U.S. airspace--"conduct exercises or develop scenarios, prior to September 11, 2001, to test a military reaction to an aircraft hijacking which appeared destined to result in a suicide crash into a high-value target?" In response, Myers outlined "five exercise hijack events" that NORAD had practiced for between November 1999 and October 2000, which all "included a suicide crash into a high-value target." [1] Yet the details of these chilling scenarios, which were like premonitions of the attacks on New York and Washington that lay ahead, failed to receive the public attention they deserved.

OCTOBER 2000 SCENARIO: STOLEN PLANE TARGETS UN BUILDING
The scenario that included an attempt to crash a plane into the UN headquarters was practiced for twice--on October 16 and October 23, 2000--as part of an exercise called Vigilant Guardian. This annual exercise was conducted by NORAD, and all of the organization, including its headquarters and its three air defense sectors in the continental United States, participated. [2]

The next Vigilant Guardian--for the year 2001--was actually being conducted at the time the 9/11 attacks occurred. [5] One can only imagine what NORAD personnel must have thought when the real-world events of September 11 so closely resembled a scenario they had encountered in the previous instance of that day's exercise--a suicide pilot trying to crash a large jet plane into a New York skyscraper.

JUNE 2000 SCENARIOS: HIJACKERS PLAN TO CRASH PLANES INTO WHITE HOUSE AND STATUE OF LIBERTY
On June 5, 2000, the Continental United States NORAD Region (CONR) was conducting an exercise called Falcon Indian, in which its three air defense sectors in the continental U.S. took part. [6] Two scenarios were practiced for that day in which hijackers planned to crash an aircraft into a well-known, "high-value" target in New York or Washington.

One scenario involved a Learjet being hijacked, and "maintaining tight formation with [a] Canadair airliner, loaded with explosives," according to Myers's summary. (It is unclear from that summary whether it was the Learjet or the Canadair plane that had explosives on board.) The hijackers "planned to crash" the Learjet "into the White House." In the other scenario, a "Communist Party faction" hijacked an aircraft bound from the western to the eastern United States. The hijackers had "high explosives on board," and intended "to crash into the Statue of Liberty." [7]

NOVEMBER 1999 SCENARIO: TERRORISTS PLAN TO CRASH HIJACKED PLANE INTO UN BUILDING
The fifth scenario Myers described was from an earlier Falcon Indian, held in November 1999. Again, NORAD's three air defense sectors in the continental U.S. took part in the CONR exercise. And, again, the exercise included a scenario based around the hijacking of a transcontinental aircraft flying from the western to the eastern United States. In the simulation, a China Airlines plane bound from Los Angeles to JFK International Airport in New York was "hijacked east of Colorado Springs by five terrorists." If the plane was not intercepted by the U.S. military, the hijackers intended "to crash into [the] United Nations building." [8]

OTHER PRE-9/11 PLANE-INTO-BUILDING SCENARIOS
Just a few months before Richard Myers revealed the existence of these five exercise scenarios, USA Today and CNN reported that NORAD had conducted exercises in the years before 9/11 that simulated hijackers crashing aircraft into buildings in the United States. Some of the scenarios that had been practiced for were described. It is unclear whether any of them correspond with the five later outlined by Myers, although, from what has been reported, it appears they were separate scenarios, additional to those in Myers's list.

USA Today reported that "in the two years before the September 11 attacks," NORAD conducted exercises simulating "hijacked airliners used as weapons to crash into targets and cause mass casualties." In one exercise, "One of the imagined targets was the World Trade Center." Another exercise involved fighter jets performing "a mock shootdown over the Atlantic Ocean of a jet supposedly laden with chemical poisons headed toward a target in the United States." These two scenarios were included in "regional drills, not regularly scheduled continent-wide exercises," according to NORAD, and the planes in the simulations were coming from a foreign country, rather than from within the U.S. [9]

CNN reported, "Sometime between 1991 and 2001, a regional sector of the North American Aerospace Defense Command simulated a foreign hijacked airliner crashing into a building in the United States as part of [a] training exercise scenario." That scenario involved the airliner "being hijacked as it flew into U.S. airspace from abroad." The exercise "was conducted at one regional sector, and was not conducted at the [NORAD] headquarters." The identity of the building hit by the aircraft was classified, but military officials said that it "would be recognizable if identified, but was not the World Trade Center or the Pentagon." [10]

How could it have happened that the organization responsible for defending U.S. airspace repeatedly practiced scenarios that so closely resembled the 9/11 attacks in the years leading up to those attacks? And considering that the existence of these plane-into-building training scenarios has largely gone unreported, might there have been other, similar scenarios practiced for by NORAD--or other U.S. military organizations--that we do not yet know of? A new investigation into 9/11 is clearly urgently required. And the role of these training scenarios is one of many aspects of the attacks that must be thoroughly examined.