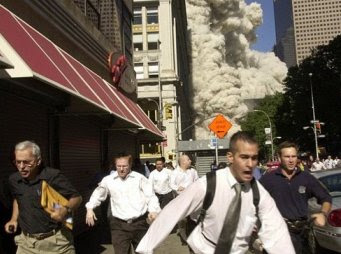 As the two entries from the Complete 9/11 Timeline copied below show, several witnesses have recalled seeing large fireballs coming from the bases of each of the Twin Towers when they collapsed on September 11, 2001. From their descriptions, it seems the fireballs erupted at the time the collapses began, or just before.

These accounts are important evidence, strongly refuting official explanations of why the World Trade Center fell. In its final report on the collapses of the Twin Towers, the National Institute of Standards and Technology (NIST) claimed the collapses "initiated at the fire and impact floors," and "progressed from the initiating floors downward." This would mean the collapse began, in the case of the South Tower, around the 78th to 84th floors, and for the North Tower, around the 93rd to 98th floors.

The ground level fireballs make sense, however, when we consider what Mark Loizeaux--the president of Controlled Demolition Inc.--has said: "If I were to bring the towers down, I would put explosives in the basement to get the weight of the building to help collapse the structure."


Shortly Before 9:59 a.m. September 11, 2001: Some Witnesses See Ground-Level Explosion Just Before WTC 2 Collapses
Some witnesses reportedly see a massive fireball at ground level, coming from the South Tower just before it starts to collapse. According to a report by the Mineta Transportation Institute (a research institute founded by Transportation Secretary Norman Mineta), "People inside the South Tower felt the floor vibrate as if a small earthquake were occurring.… The vibration lasted for about 30 seconds. The doors were knocked out, and a huge ball of flame created by the exploding diesel fuel from the building's own supply tank shot from the elevator shaft and out the doors of the South Tower, consuming everything in its path. Minutes later, at 9:59 a.m., the tower collapsed." [Jenkins and Edwards-Winslow, 9/2003, pp. 16] Around the same time, Port Authority Police Officer Will Jimeno is in a corridor leading toward the North Tower. "Suddenly the hallway began to shudder," and he sees "the giant fireball explode in the street," when the South Tower begins to collapse. [Bowhunter, 1/2003] Ronald DiFrancesco is the last person to make it out of the South Tower before it collapses. As he is heading toward the exit that leads onto Church Street, he hears a loud roar as the collapse begins. According to the Ottawa Citizen, "Mr. DiFrancesco turned to his right in the direction of Liberty Street, to see a massive fireball—compressed as the South Tower fell—roiling toward [him]." He bolts for the exit, before being knocked unconscious and blown many yards across the street. [USA Today, 12/18/2001; Ottawa Citizen, 6/4/2005; Ottawa Citizen, 6/5/2005; PBS NOVA, 9/5/2006] A number of other witnesses report feeling the ground shaking just seconds before the South Tower collapses (see Shortly Before 9:59 a.m. September 11, 2001).
Source

10:28 a.m. September 11, 2001: Reporter Sees Ground-Level Explosion When North Tower Collapses
CBS News correspondent Carol Marin witnesses what she describes as a "gigantic fireball" coming from the base of the North Tower as it starts to collapse. [USA Today, 9/11/2001; Chicago Sun-Times, 9/12/2001; Daily Herald (Arlington Heights), 9/11/2002] Marin headed to the scene of the attacks and arrived on West Street after the South Tower collapsed. She then sees the second tower come down, later describing, "I was only a block or two away from the North Tower when the street trembled under my feet, a fireball of pooled jet fuel exploded out of the building's base, and it too, unbelievably, started to collapse right in front of me." [Chicago Sun-Times, 9/10/2006] (However, the explosion could not be due to "pooled jet fuel," as, according to the National Institute of Standards and Technology, "The jet fuel" from the planes "was mostly consumed within the first few minutes after impact." [National Institute of Standards and Technology, 6/18/2004; New York Times, 4/5/2005]) In one telling, Marin describes, "a roar seemed to come out of the earth," causing the fireball. [Gilbert et al., 2002] In another, she says, "there was a roar, an explosion, and we could see coming toward us a ball of flame, stories high." She runs, and a firefighter throws her against a building to protect her. She recalls, "The flame somehow stopped short of us." [CBS News, 2002, pp. 54] Other witnesses also describe the ground shaking before the North Tower collapse (see Shortly Before 10:28 a.m. September 11, 2001). And some witnesses similarly report seeing a fireball at ground level coming from the South Tower when it collapsed (see Shortly Before 9:59 a.m. September 11, 2001).
Source
Posted by Shoestring at 11:34 No comments: