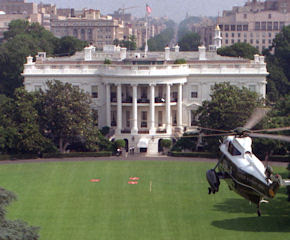 Despite claims by the U.S. government that the events of 9/11 were unexpected, from 1998 the Secret Service was "crashing planes into the White House ... on a simulation program provided by the military" during training exercises, according to a retired Secret Service agent who had been involved with running those simulations. When this individual and his Secret Service colleagues learned that a plane had crashed into the World Trade Center on the morning of September 11, 2001, one of those colleagues pointed to him and commented, "You know all about that." [1]

The existence of these plane crash simulations was revealed by Paul Nenninger, who worked for the Secret Service for 26 years, in a chapter he wrote for a book published in 2005. In 1997, Nenninger had been assigned to the Secret Service's James J. Rowley Training Center, just outside Washington, DC, in Beltsville, Maryland, where he served as program manager in charge of the Security and Incident Modeling Lab (SIMLAB). [2]

Nenninger wrote that on the morning of September 11, he had been at the Secret Service headquarters in Washington for a board meeting. One of the last people to arrive for the meeting reported that a plane had just crashed into the World Trade Center. "Across from me sat a lady who was formerly the special agent in charge of the White House," Nenninger wrote. "She pointed at me and said, 'You know all about that.'" Nenninger then explained to the others there for the meeting "that the training center had been crashing planes into the White House since 1998 on a simulation program provided by the military. It was done to test the security responses of the various agencies that interact to provide security and support to the White House." [3]

THE 'JOINT CONFLICT AND TACTICAL SIMULATION' SOFTWARE
For the training simulations Nenninger was involved with, the Secret Service had what Nenninger described as "a very good piece of analytical software" called the Joint Conflict and Tactical Simulation (JCATS), which had been developed by the Lawrence Livermore National Laboratory. [4] The Lawrence Livermore National Laboratory (LLNL) in California is a research institution for science and technology applied to national security. [5] It has had a longstanding relationship with the U.S. Department of Defense for research and development for advanced defense technologies. [6]

JCATS was unveiled by computer scientists at LLNL in 1997 and was, at that time, the laboratory's most powerful combat program. It was then distributed to the Secret Service by the Joint Warfighting Center at Fort Monroe, Virginia, which was the program's Defense Department sponsor. By the start of 2000, as well as the Secret Service, JCATS was being used by such agencies as the Air Force Security Forces, the Special Operations Command, the Marine Corps., and the Army. [7]

JCATS simulations were particularly popular with the Secret Service's special operations units. Nenninger wrote that when these units "found that their military counterparts used similar software, and when possible did not launch an operation without a chance to have it simulated, they requested more and more time in SIMLAB." [8]

The U.S. military used JCATS "primarily for training individual commanders in battlefield operations and tactics," according to LLNL's magazine, Science & Technology Review. Using JCATS, "war games" that were "extremely accurate" and therefore provided "directly applicable and credible training" could be "set up to simulate combat situations, with teams of officers playing the various forces." [9] JCATS was used, among other things, to rehearse possible combat options in support of the 1999 Kosovo conflict. But as well as combat scenarios, JCATS could simulate exercises for purposes such as counterterrorism, hostage rescue, and site security. [10]

SECRET SERVICE RAN EXERCISES 'IN PREPARATION FOR TERRORIST ATTACKS ON THE WHITE HOUSE'
Nenninger did not state explicitly that the simulated plane crashes in the Secret Service exercises were imagined to be part of a mock terrorist attack, rather than, say, a simple aircraft accident. However, what he wrote did suggest that this had been the case. Nenninger asked, "Can you imagine really crashing planes into buildings?" He then added that "simulations allow you to ... practice something that you will never be able to do live in the real world ... and ... also allow you to practice scenarios that can be attempted by a terrorist or other deranged individual." So presumably the computer simulations of planes crashing into the White House were based around the scenario of a crash that was caused by "a terrorist or other deranged individual." [11]

Supporting this contention, in May 2001, then-Secretary of the Treasury Paul O'Neill testified that the Secret Service had been running "interagency tabletop exercises in preparation for terrorist attacks on the White House." [12] (However, O'Neill did not specify whether the exercises he was referring to included computer simulations of planes crashing into the White House.)

THE POSSIBLE ROLE OF COMPUTER SIMULATIONS IN PLANNING THE 9/11 ATTACKS
If, as has been suggested, rogue individuals working inside the military and other U.S. government agencies were responsible for planning and perpetrating the 9/11 attacks, JCATS would presumably have been a useful tool to help them prepare those attacks. It might, for example, have identified weaknesses in the security at the World Trade Center, therefore making it easier for operatives to sneak in and plant explosives, to be used to bring down the buildings on September 11. Science & Technology Review said JCATS was "ideally suited" to the task of evaluating site security. LLNL itself used the software to "evaluate the effectiveness of existing physical defenses and response actions against different threats." [13]

It would be important to find out whether any of the agencies that used JCATS ever ran computer simulations of attacks on the World Trade Center or Pentagon prior to 9/11. This is certainly a possibility worth considering, since, as Science & Technology Review pointed out, "The realism of JCATS simulations in urban settings makes it extremely valuable for assessing and strengthening site security at a range of government facilities." Furthermore, JCATS allowed users to "import blueprints of specific buildings for urban warfare and site security exercises." [14]

JCATS simulations may also have identified weaknesses in America's air defenses, and might have helped determine how those weaknesses could be exploited so the nation would be unprotected against an aerial attack. Nenninger in fact pointed out that in the Secret Service exercises he was involved with, JCATS could handle "FAA radar"--a feature that would presumably have made the program useful for evaluating air defenses. [15]

WERE SECRET SERVICE SIMULATIONS RELATED TO THE PLANNING OF 9/11?
There is a significant amount of evidence suggesting that training exercises run by the military and other government agencies played an important role in enabling the 9/11 attacks to be prepared and carried out. [16] It would therefore be worth considering whether the Secret Service training exercises described by Paul Nenninger, involving computer simulations of planes crashing into the White House, played a role in the planning and/or perpetration of the attacks. In particular, did the Secret Service conduct any of these simulations in the weeks or months just before 9/11? Was it even running--or scheduled to run--one of these simulations on the day of 9/11 itself?

It is perhaps worth noting that on possibly three occasions during the morning of September 11, suspicious aircraft appeared to be on a collision course for the White House. Just after 9:30 a.m., air traffic controllers spotted "an unidentified aircraft flying at unusually high speed directly toward the White House," according to the Washington Post. This was reportedly the aircraft that subsequently hit the Pentagon. [17] Secret Service agents at the White House believed at one point that the aircraft was less than a minute away from impact with their building. [18]

From 10:02 a.m. until around 10:15 a.m., government officials in the Presidential Emergency Operations Center (PEOC) below the White House were receiving reports that an aircraft, presumably hijacked, was approaching Washington. Then at around 10:30 a.m., those in the PEOC were notified that another hijacked aircraft was approaching, and was only 5 to 10 miles away. This suspicious aircraft turned out to be just a medevac helicopter, according to the 9/11 Commission Report. [19]

In light of the important relationship there appears to have been between training exercises and the events of September 11, it would also make sense to consider the role that could have been played by the Joint Conflict and Tactical Simulation--a powerful computer program that, in Nenninger's words, allowed agencies "to practice scenarios that can be attempted by a terrorist."