The Assassination of JFK Junior - Murder by Manchurian Candidate

Overwhelming, jaw-dropping evidence of foul play in the death of John F Kennedy Jr. - all based on official government documents.

This is a must see video. 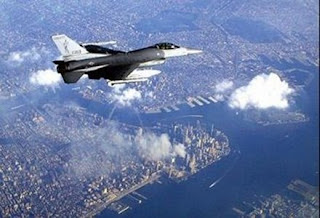 September 11, 2001 was an extraordinary day for many reasons. It was a day when hijackers who were amateur pilots and had never before flown jet planes suddenly gained remarkable flying skills. It was a day when scientific laws apparently changed, so that relatively small fires supposedly could cause three massive skyscrapers to disintegrate into dust, each in the space of just a few seconds. And it was also a day when two F-15s appear to have made possibly the slowest journey by military fighter jets in all history.

A new entry in the Complete 9/11 Timeline summarizes the testimonies of numerous witnesses who were on the ground in Manhattan that morning, describing when they first heard fighter jets arriving overhead. Despite a few contradictory accounts, these witnesses generally agree that fighters did not arrive over New York until around the time of the second WTC collapse, so roughly about 10:20 a.m.-10:35 a.m.

In response to the first hijacking, of Flight 11, two F-15 fighter jets were launched from Otis Air Force Base in Cape Cod, Massachusetts, which is about 153 miles away from New York City. The F-15s were ordered to scramble at 8:46 a.m. and were in the air by 8:53 a.m. But, according to the 9/11 Commission: "Lacking a target, they were vectored toward military controlled airspace off the Long Island coast. To avoid New York area air traffic and uncertain about what to do, the fighters were brought down to military air space to 'hold as needed.' From 9:08 to 9:13, the Otis fighters were in this holding pattern." [1] After leaving it at 9:13, they finally arrived over Manhattan at 9:25 a.m. [2]

This account itself is extraordinary. The first sign of a problem with Flight 11 was when it broke communication with air traffic control just before 8:14 a.m., refusing to respond to a request to climb to 35,000 feet. The emergency was compounded when Flight 11's transponder went off minutes later, at 8:21 a.m. [3]

As MSNBC reported: "If a plane deviates by 15 degrees, or two miles" from its pre-arranged course, "flight controllers will hit the panic button. ... It's considered a real emergency." In response, "F-16 interceptors can fly alongside a plane to see who's flying it. They can also try to force it off course. Once it is apparent that it is not following directions, it might be forced over the ocean or to a remote airport--or even shot down." [4]

Clearly then, a plane need not be hijacked for an emergency to exist. A plane that is off course or out of contact with air traffic control would be a potential danger to other aircraft in its area, regardless of whether or not it was hijacked. A speedy response by the military would be essential.

This point has been elucidated by Robin Hordon, an air traffic controller from 1970 to 1981, who in fact was responsible for the air traffic sector where Flight 11 first became an emergency on 9/11: "It is important for people to understand that scrambling jet fighters to intercept aircraft showing the signs of experiencing 'IN-FLIGHT EMERGENCIES' such as going off course without authorization, losing a transponder signal and/or losing radio contact, is a common and routine task executed jointly between the FAA and NORAD controllers. The entire 'national defense-first responder' intercept system has many highly trained civilian and military personnel who are committed and well trained to this task. FAA and NORAD continuously monitor our skies and fighter planes and pilots are on the ready 24/7 to handle these situations." [5]

Therefore, very soon after 8:14 a.m., Flight 11 should have been declared an emergency, and fighters should have been in the air to intercept it within minutes. According to Hordon: "The first fifteen minutes are the key. I have done the math. If we had scrambled some aircraft five or six minutes after we saw this huge deviation, the fighters from Otis would have intercepted American 11 over southwestern Connecticut or just south of Albany, NY." [6] As we know, this did not happen.

Even according to the 9/11 Commission's account, it was more than an hour after Flight 11 became an obvious emergency that the fighter jets launched in response to it finally arrived over New York. But if we believe the claims of the majority of witnesses quoted by the Complete 9/11 Timeline, it actually took more than two hours from when the emergency began for F-15s to arrive over the city. Yet the base from where they took off was just 153 miles away, and F-15s have a maximum speed of 915 mph at sea level, or 1,875 mph at high altitude. [7] So what slowed them down?

It could hardly be claimed that the mission the fighters were being called upon to perform was something out of the ordinary. A report published by the General Accounting Office in May 1994 stated: "Overall, during the past 4 years, NORAD's alert fighters took off to intercept aircraft 1,518 times, or an average of 15 times per site per year. Of these incidents, the number of suspected drug smuggling aircraft averaged one per site, or less than 7 percent of all of the alert sites' total activity. The remaining activity generally involved visually inspecting unidentified aircraft and assisting aircraft in distress." In other words, over this four-year period, military scrambles averaged about one per day. After 9/11, it was reported that NORAD had scrambled fighters 67 times during the nine months from September 2000 to June 2001. [8] So clearly the launching of military jets to intercept suspicious aircraft was a routine operation.

Fighters were reportedly able to respond within minutes of being called upon to do so. In the days after 9/11, Otis Air Force Base was reported as keeping two fighters "on 24-hour alert," which, "if needed, must be in the air within five minutes." [9] An alert pilot at Homestead Air Reserve Base, Florida--another of NORAD's alert sites--said: "If needed, we could be killing things in five minutes or less." And a book published by the 1st Air Force in 1999 described the emergency scramble procedure at Tyndall Air Force Base in Florida, also one of NORAD's alert sites. Tech. Sgt. Don Roseen, who was responsible for keeping the fighters there ready for instant takeoff, was quoted as saying that the alert jets were "hot and cocked, they are ready. When that alarm goes off, everything else just stops." [10] According to Robin Hordon: "Jet fighters typically intercept any suspect plane over the United States within 10-15 minutes of notification of a problem." [11]

How then can we explain the failure of the military to stop Flight 11 and Flight 175 from hitting the World Trade Center? And why did fighter jets apparently not arrive over New York until around 10:30 a.m.?

It could hardly have been due to incompetence. In fact, in January 1999, the 1st Air Force air sovereignty team, which, as part of NORAD, is responsible for the air defense of the continental United States, scored an unprecedented "grand slam" in an evaluation of its effectiveness. The three air defense sectors responsible for protecting U.S. airspace had their command and control skills tested in the Air Combat Command Operational Readiness Inspections (ORI). All were rated "outstanding," which was the highest score possible on a five-tier scale. Brigadier General Kenneth Stromquist Jr., the 1st Air Force vice commander, commented: "There's never been a grand slam ... in the history of this outfit." [12]

How could this team's performance plummet so abysmally two-and-a-half years later, on 9/11? Adding to the suspicion is the fact that no one in the military has been punished for this disastrous performance. Retired Lt. Col. Robert Bowman, a former fighter pilot, has summed it up: "No one has been court-martialed. No one has been reprimanded. No one has been demoted. No one is to blame. That only tells me one thing. The ones to blame are too high up to play scapegoat." [13]

Here's a rather bizarre coincidence. For anyone unaware of this fact, a 1994 bestselling novel by Tom Clancy--Debt of Honor--ended with a Japanese pilot deliberately crashing his Boeing 747 into the U.S. Capitol building during a joint session of Congress with the President attending, thus decapitating the political leadership.

This is odd in itself, in light of what happened seven years later on 9/11. But check out the following quote from the New York Times' review of Debt of Honor:

[T]he President and the entire Congress must be eliminated in an inadvertently comic deus ex machina piloted by a sullen Japanese airman who miraculously does not grunt "Banzai!" as he plows his Boeing 747 into the Capitol. Former Secretary of the Navy John Lehman has recently had the arguable taste to remark, apropos this episode in "Debt of Honor," that this particular fantasy has long been his own. I don't like Congress either, but Abraham Lincoln, Lehman's fellow Republican and mine, did go to some pains to keep the Capitol's construction going during the Civil War as a symbol of the Union's continuity.

As is well known, John Lehman went on to become one of the members of the 9/11 Commission.

Now isn't that odd? A man who would later be one of the official investigators of 9/11 revealed that he fantasized about using a commercial jet as a weapon, and crashing it into a landmark building in the U.S.
Posted by Shoestring at 03:48 No comments: