The Breakdown of the FBI Anti-Terror Team on 9/11


A brief but important NBC News report broadcast during the morning of 9/11 indicated how the FBI was rendered useless in its ability to respond to the kind of attacks that were taking place. Shortly after 10:00 a.m., correspondent Andrea Mitchell reported: "This very interesting information ... from the FBI: They have been operating a massive exercise from their hostage rescue unit. All of their top teams, about 50 personnel, helicopters, equipment, were in Monterey, California for the last two days, scheduled to fly back today commercially. So all of those people are out of place." She continued: "You've got all of their special experts on this stuck in Monterey, California, trying to get a military flight back because there are no longer commercial flights. So they are seriously out of pocket, and there is a real breakdown of the FBI anti-terror coordination team, which is of course the principal team that would lead any effort, and was so effective under Jim Kallstrom in New York City during the World Trade Center bombing and the TWA [Flight 800] explosion."

Despite the implications of this incredible information, only one newspaper covered it. In a report published that same day, USA Today briefly described: "The attack was so unexpected that a joint FBI/CIA anti-terrorist task force that specifically prepared for this type of disaster was on a training exercise in Monterey, Calif." The politics website Evote.com also mentioned the incident, concluding: "just as the worst terrorist act was being committed on American lives and property, the chief federal agency responsible for preventing such crimes was being AWOL." But, in the six years since, this information has been ignored, and no mention was made of it in the 9/11 Commission Report.

If the official theory about 9/11 is correct, and the attacks were indeed perpetrated by Osama bin Laden and Al Qaeda, then the absence of the FBI's antiterrorist experts at the one time they were most needed must be a freak coincidence. However, if the official theory is wrong, then this could have been part of a deliberate attempt to 'stand down' normal lines of defense, so as to ensure that the attacks succeeded.

In her report, Mitchell also stated: "It's fair to say, according to sources that we've talked to here at NBC, that the FBI rescue operations and other FBI operations are really in chaos right now, because they can't reach their officials in New York, all of their phone lines are down." I have previously described evidence that communications may have been deliberately sabotaged on 9/11, particularly in the Washington, DC area. Key individuals, including government officials and members of the military, appear to have been affected. So when we hear a report about the FBI on 9/11, stating, "all of their phone lines are down," we must surely also wonder whether this was due to sabotage. A proper investigation of the 9/11 attacks is urgently needed to establish the truth.
Posted by Shoestring at 06:51 No comments: 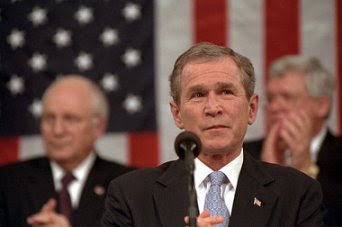 How did President Bush feel about the September 11 attacks? In the following hours, weeks, and months, he repeatedly used one word. While most people no doubt felt that it was an absolute catastrophe, George W. Bush described 9/11--or at least the political climate it had engendered--as an "opportunity." He said this again and again:

September 11, 2001
Hours after the attacks, during a 9:30 p.m. meeting with his key advisers, Bush declared: "This is a great opportunity. We have to think of this as an opportunity." [1]

Later that evening, he dictated for his diary: "My hope is that this will provide an opportunity for us to rally the world against terrorism." [2]

September 13, 2001
During an appearance in the White House Oval Office, Bush said: "You know, through the tears of sadness I see an opportunity. ... And now is an opportunity to do generations a favor, by coming together and whipping terrorism." [3]

During the National Security Council meeting later that day, he said: "This is a new world. ... Start the clock. This is an opportunity. ... I want Afghan options ... I want decisions quick." [4]

September 19, 2001
During a photo opportunity at the White House, the president described: "Progress is being made. ... I said at the time, through my tears I see opportunity. One of the opportunities I saw was the ability not to put--not only for freedom-loving nations to come together to say resolutely we will fight terrorism, but I felt like there would be--this event may shake up the attitudes of the Middle East where people would end up resolving to show the world that there could be peace there as well." [5]

October 3, 2001
Bush told a meeting of business leaders in New York: "There's now a reassessment taking place all over America. ... [P]eople are reassessing: what can I do to help? I truly believe that out of this will come greater opportunities for peace; peace in the Middle East. This is a fantastic opportunity born out of sadness, and the question is--can we seize it?" [7]

October 21, 2001
During a press conference along with Russian President Vladimir Putin, Bush said: "Both of us see great opportunity. Both of us see positive good that has come out of the evil of September the 11th. Both of us are willing to work hard to seize the moment." [8]

October 29, 2001
Addressing the African Growth and Opportunity Forum, the president said: "Out of the sorrow of September 11th, I see opportunity, a chance for nations to strengthen and rethink and reinvigorate their relationships." [9]

January 29, 2002
During his State of the Union address, the president said: "In the sacrifice of soldiers, the fierce brotherhood of firefighters, and the bravery and generosity of ordinary citizens, we have glimpsed what a new culture of responsibility could look like. ... We've been offered a unique opportunity, and we must not let this moment pass. ... This time of adversity offers a unique moment of opportunity--a moment we must seize to change our culture. ... And we have a great opportunity during this time of war to lead the world toward the values that will bring lasting peace. ... In this moment of opportunity, a common danger is erasing old rivalries." [10]

July 19, 2002
Bush told journalist Bill Sammon that "the events of September 11 caused him to focus on two big goals that he believed the nation could achieve." One of these, the president said, was "peace. ... I believe we can achieve the peace in the Middle East. And I believe we can achieve a peace in South Asia. ... I view this as an opportunity that we will seize." And at home, he added: "the cultural shift toward personal responsibility is going to enable us to better deal with those who could be left behind. ... And one of my jobs is to seize this opportunity, to encourage its impact on our culture." [11]

It would appear that the president's feelings were similar to those articulated by a senior Pentagon official. In 2004, this unnamed official told Washington Times reporter Rowan Scarborough: "I hate to say this and would never say this in public, but 9/11 had its benefits." [12]