Did Training Exercises Prevent Andrews Air Force Base From Responding to the 9/11 Attacks? 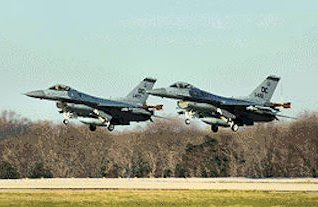 Why did airplanes fly around for an hour and a half without
interceptors being scrambled from Andrews [Air
Force Base] ... right next to the capital?


- Paul Hellyer, Canadian minister of national defense, 1963-1967
Many aircraft at a military base just outside Washington, DC, were taking part in training exercises around the time the terrorist attacks occurred on September 11, 2001, it has been revealed. But whether these exercises impaired the ability of the various units at the base to effectively respond to the attacks has never been properly investigated.

On September 11, FAA air traffic controller James Ampey was on duty in the control tower at Andrews Air Force Base in Maryland, near the District of Columbia border. He later told the 9/11 Commission that there was "an unusually high number of aircraft taking off and landing at Andrews that morning, because previously scheduled military exercises were under way." Ampey apparently did not tell the Commission what specific exercises these were, or the time period during which the aircraft were "taking off and landing" at the base. [1] However, other publicly available information offers minor clues about these exercises.

'GLOBAL GUARDIAN' EXERCISE
Journalist and author Dan Verton has described that, around the time of the Pentagon attack on 9/11 (9:37 a.m.), "civilian and military officials were boarding a militarized version of a Boeing 747, known as the E-4B National Airborne Operations Center (NAOC), at an airfield outside of the nation's capital. They were preparing to conduct a previously scheduled Defense Department exercise." [2] The airfield Verton referred to could well have been Andrews Air Force Base, as this is located only 10 miles from Washington. [3] Indeed, according to Miles Kara, who was a professional staff member of the 9/11 Commission, primary source information reveals that an E-4B took off from Andrews that morning, and was airborne at 9:27 a.m. [4] The exercise Verton referred to was likely "Global Guardian," which was "in full swing" when the attacks began, and for which three E-4Bs were launched. Global Guardian was an annual exercise run by the U.S. Strategic Command, to test its ability to fight a nuclear war. [5] Whether other aircraft taking off or landing at Andrews were also participating in Global Guardian is unknown.

NORAD EXERCISE ON 9/11
Another major exercise taking place on September 11 was "Vigilant Guardian." It seems less likely, however, that aircraft at Andrews would have participated in this.

The annual Vigilant Guardian exercise was being conducted by the North American Aerospace Defense Command (NORAD), including its Northeast Air Defense Sector (NEADS). [6] Vigilant Guardian has been described as "an air defense exercise simulating an attack on the United States," and was scheduled to include a simulated hijacking during the morning of September 11. [7] However, the DC Air National Guard (DCANG), which is based at Andrews, was not part of the NORAD air defense force. [8] Furthermore, members of the DCANG had just returned from a major training exercise in Nevada. With only a few pilots available, 9/11 was reportedly a "light flying day" for the unit, which would indicate that it would not have participated in Vigilant Guardian or any other major exercises that morning. [9] And since Andrews was not one of NORAD's seven "alert" sites around the U.S., it seems unlikely that any of the other military organizations there would have been involved in a NORAD exercise. [10]

NUMEROUS ORGANIZATIONS AT ANDREWS
While only limited information is available indicating what exercises the planes at Andrews were involved in, we know that numerous military organizations are located at the base, in addition to the DCANG, some of which may have had air defense capabilities. And some of them could well have been participating in the exercises Ampey referred to.

Among more than 60 separate organizations located at Andrews Air Force Base are units from the Army, Navy, Marine Corps, Air Force Reserve, and Air National Guard. [11] These include Marine Fighter Attack Squadron 321, which flies the F/A-18 Hornet fighter jet, and Naval Air Facility, Washington, DC, which has numerous aircraft available, including the F/A-18 Hornet. [12] Marine Fighter Attack Squadron 321 at least appears to have had air defense capabilities that may have been able to provide protection against the attacks on September 11: At around 9:50 a.m. that morning, one of its officers called a friend who worked at NEADS, and said: "Dude, get us in the war. I've got wrench turners on our planes uploading weapons. What can we do?" [13]

Another unit at Andrews was the 1st Helicopter Squadron. Its primary mission was "to support [Department of Defense] contingency plans for transport of key government officials should a national emergency arise." It had around 200 members of staff, and possessed 19 twin-engine UH-1N "Huey" helicopters. Many of these helicopters reportedly flew throughout the day of September 11. [14] Whether the 1st Helicopter Squadron was involved in the training exercises that morning is unknown.

DID EXERCISES AFFECT THE EMERGENCY RESPONSE?
It is essential to investigate whether the training exercises impaired the organizations at Andrews in their ability to respond to the 9/11 attacks. Were any of them delayed or otherwise hindered as a result of their participation in an exercise? Were assets, such as aircraft and personnel, which could otherwise have been utilized in the response to the attacks, unavailable because they were being used in an exercise? Were military and civilian air traffic controllers in the Washington area perhaps confused about flights in their region because of the exercises taking place?

In a news report published on the day of 9/11, Knight Ridder stated, "Air defense around Washington, DC, is provided mainly by fighter planes from Andrews Air Force Base." [15] Indeed, the DC Air National Guard is known as the "Capital Guardians." [16] According to a 9/11 Commission memorandum, "Many planes were scrambled out of Andrews" throughout the day of September 11. [17] And yet the first fighter jet to take off from there in response to the attacks was an unarmed DCANG F-16, which took off at 10:38 a.m., more than 30 minutes after the attacks had come to an end. [18] Might fighter jets have been able to respond earlier on, only the emergency responses of units at Andrews were somehow delayed by the training exercises?

AIR GUARD HINDERED BY TRAINING MISSION AND RECENT EXERCISE
As mentioned above, it seems unlikely that the DC Air National Guard would have been involved in a major training exercise on September 11. However, other circumstances seem to have significantly reduced its ability to respond to the attacks.

Three days earlier, on September 8, members of the DCANG returned from a major exercise in Nevada, called "Red Flag." Most of its fighter pilots, who flew commercial planes in their civilian lives and were involved with the unit on only a part-time basis, were consequently away, either back at their airline jobs or on leave, according to different accounts. The unit reportedly had just seven pilots available on 9/11. [19] At least three of these were inexperienced, junior pilots. [20] And of the seven pilots, three had taken off shortly before the first attack in New York occurred, for a routine training mission around 200 miles away from base, over North Carolina. They did not arrive back at Andrews until after the attacks had ended. [21]

While discussing the 9/11 attacks, in 2004, Paul Hellyer, a former Canadian minister of national defense, posed the question, "Why did airplanes fly around for an hour and a half without interceptors being scrambled from Andrews [Air Force Base] … right next to the capital?" He said: "With a quick-reaction alert they should have been in the air in five minutes or 10 minutes. If not, as a minister of national defense, which in the United States would be the secretary of defense, I would want to say, 'Why not?'" [22]

His questions are as pertinent today as they were five years ago.