Bobcats Over Washington on 9/11: What Were Two Mystery Aircraft Doing Overhead at the Time of the Pentagon Attack? 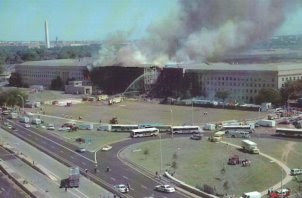 Two military aircraft were flying at high altitude near the Pentagon around the time it was hit on 9/11, but the identities of these aircraft and what they were doing over the Pentagon are unknown.

The planes had the call signs "Bobcat 14" and "Bobcat 17." A partial transcript of air traffic controller communications reveals they were communicating with the control tower at Washington's Reagan National Airport, which is less than a mile from the Pentagon, between at least 9:31 a.m. and 9:40 a.m. on September 11. [1] (The attack on the Pentagon took place at 9:37 a.m. [2]) Radar data has shown that the two aircraft flew "in trail" (in single file, with one directly behind the other) at an altitude of 21,000 feet, and were overhead in the few minutes before the Pentagon was hit. [3]

LAUNCHED FROM DOVER AIR BASE
It would seem essential to establish the exact identities of these aircraft and find out what they were doing in the vicinity of the Pentagon at such a critical time. Yet, eight years after the attacks took place, we still do not have this information. (The fact that these aircraft were near the Pentagon at the time it was hit is itself virtually unknown.)

According to a 9/11 Commission memorandum, "flight strips and other information" indicate that the two aircraft, Bobcat 14 and Bobcat 17, "originated out of Dover Air Force Base in Delaware." The memorandum added, "It is possible, but not confirmed, that they were Air Force corporate passenger jets." When questioned by the 9/11 Commission, Bob Lazar, the acting operations manager at Reagan Airport on September 11, said he "did not remember any aircraft with the call sign 'Bobcat' that hung out over the National airspace" that day. All he could say was that he did remember two aircraft "coming from the north, but he did not think that they entered National's airspace." [4]

OTHER AIRCRAFT NEAR THE PENTAGON
Furthermore, there were at least two other military aircraft near the Pentagon at the time it was hit. A C-130 cargo plane that took off from Andrews Air Force Base, which is 10 miles from the Pentagon, was airborne by 9:33 a.m., and was seen by numerous witnesses above the Pentagon just after the attack there. [5] Its pilot reportedly witnessed the explosion from the Pentagon crash. [6]

And television news reporters described a "white jet" plane that was "circling the White House" a few minutes after the Pentagon was hit. [7] (The White House is about three miles from the Pentagon.) Two government sources familiar with the incident later told CNN that the plane was a military aircraft, but its details were classified. An analysis by CNN suggested the aircraft was an E-4B, which is a militarized version of a Boeing 747 that is used as a flying command post. [8] One such aircraft is known to have taken off from an airfield outside Washington, DC, shortly before the Pentagon was hit. [9]

Considering the historical significance of the 9/11 attacks, which have had devastating consequences that affect us to this day, it is essential that important details surrounding those attacks be thoroughly investigated. We therefore need to know exactly what the two aircraft--Bobcat 14 and Bobcat 17--were, and why they were flying above the Pentagon around the time it was attacked on September 11.