Pentagon Medics Thought 9/11 Attack Was Part of a Drill 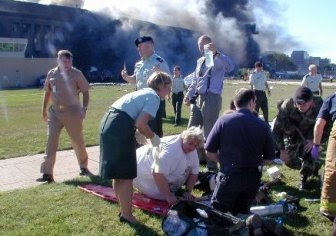 The morning of September 11, 2001, the U.S. Army's DiLorenzo Tricare Health Clinic (DTHC) had over 200 staff members working in its offices at the Pentagon, available to offer primary and emergency care to Department of Defense employees. [1] Following the attack on the Pentagon, DTHC workers were involved with the emergency response, performing triage and treatment in the clinic and at other locations within the building. [2]

Curiously, several DTHC workers have indicated that, when they were ordered to evacuate after the Pentagon was hit, they initially thought this was a drill. Admittedly, the clinic is located in the basement and on the east of the building--the opposite side to where it was impacted--and so people there had not heard or felt the crash. [3] Yet, considering that the two crashes occurring in New York made it obvious the U.S. was under attack, this reaction seems surprising. An examination of the accounts of these workers and other evidence raises the possibility that their confusion was because a drill was scheduled to take place there that day. Remarkably, there is evidence that such a drill might have been based around a plane hitting the Pentagon.

WITNESS ACCOUNTS
Captain Jennifer Glidewell, the chief nurse at the acute care section of the DTHC, has described how she mistook the evacuation for part of a training exercise. Like numerous others at the clinic, Glidewell had seen the TV coverage reporting the attacks in New York. When informed that two planes--not one--had hit the World Trade Center, she said out loud: "That wasn't an accident. That was terrorism." A man had then run through the clinic, looking serious and yelling, "Everybody get out!" Glidewell started evacuating the place, herself leaving with Sergeant Matthew Rosenberg, a medic there. Yet Glidewell has recalled that, as she and Rosenberg saw "throngs of people going out," they were "thinking fire drill. I still had not made the connection." [4]

After being told there was a patient in the Pentagon's center courtyard requiring attention, Glidewell and Rosenberg headed there. [5] Authors Patrick Creed and Rick Newman have described, "When they entered the courtyard, the first thing they saw was smoke, billowing up out of the opposite side of the building." They saw a man, "running with his arms up in the air, screaming, his clothes hanging off him like rags." Yet Glidewell thought this was part of a training exercise: "When Glidewell saw his face, her first thought was that it was the best moulage job she had ever seen. Moulage was the makeup medical practitioners put on mock patients during exercises, to simulate injuries." Only as she realized his injuries were genuine did reality sink in. She grabbed her radio and yelled into it: "This is not a drill! This is real!" [6]

Other DiLorenzo Clinic employees have also recalled mistaking the response to the Pentagon attack for a drill:

• Dr. Veena Railan was examining a patient when she heard the call to evacuate. She recalled: "I was not very sure what was happening, what was going on at that time. Maybe this is a drill because of what happened in New York." [7]
• U.S. Air Force Surgeon General Paul Carlton had been at the Pentagon for a meeting. [8] After the building was hit, he'd gone to the DTHC and volunteered to head a team of medics that was going to the center courtyard. [9] As they rushed there, a young sergeant "was under the impression that this crash was yet another exercise." Carlton told him, "I think this one's for real, my friend." [10]
• Captain Liza Lindenberg, a physician at the DTHC, heard about the WTC being hit. She was discussing this with a couple of colleagues, "and we were jokingly saying that maybe we should go home for the day because of the incident." She then "heard a thud, like a construction crane, and then all of a sudden people started yelling that we should be evacuating." However, "Not until we went out the door did I see these plumes of smoke and thought, this is definitely not a drill." [11]
• Major Bridget Larew had been told two planes had hit the WTC. She realized, "That wasn't a coincidence; that is terrorism." After the man ran through the clinic, yelling at everyone to evacuate, she saw "people streaming by the glass doors as they were exiting the building." She said aloud, "I don't think this is an exercise." After helping an injured victim, she "went back out to the front desk to see if I had other providers because, by now, the people, our medical teams were starting to come back in the building, realizing that this was not a drill and that they needed to be here with us to get supplies and stuff." [12]
• Staff Sergeant Keith Pernell saw the television footage of the second plane hitting the WTC and was thinking, "What's going on?" Although he did not hear or feel the impact when the Pentagon was hit, he heard the order to "Get out!" Yet, he has recalled, "We just thought it was a regular fire drill." [13]
• Sergeant Mark Maxey Davis knew about the first--but not the second--plane hitting the WTC. When someone walked into the office he was in and said they all needed to evacuate the building, he has recalled, "I just thought it was a routine fire drill or something like that." As he walked out, he "didn't grab anything because, again, I just thought it was something routine." When he got outside, he saw people running from the center courtyard. As he was leaving the North Parking area, he looked back and saw the smoke coming from the Pentagon. Yet he "wasn't even afraid then because I just thought it was maybe something caught on fire." [14]

While these accounts do not prove the DTHC was due to take part in a training exercise that day, other evidence further supports this possibility.

MORE EVIDENCE OF A DRILL AT THE PENTAGON ON 9/11
Major Lorie Brown was the chief nurse at the DiLorenzo Tricare Health Clinic on September 11. According to Brown, the clinic "actually had our MASCAL equipment out of the storage areas" that morning, "because we were doing an inventory." ("MASCAL" equipment is that which is required for situations with "mass casualties.") Brown has continued: "So there were many pieces that just fell into place and worked so well on that day. It was just fortuitous. It was just amazing that way that things kind of happened the way they did." [15]

Sergeant Matthew Rosenberg said that, on September 11: "We had virtually completed our MASCAL plan. I was setting up training for medics, I was in the process of ordering new supplies, and trying to reinvent what we would do, how we would go about it." Furthermore, "Believe it or not, the day prior to" September 11, he had been "on the phone with the FBI, and we were talking, 'so who has command should this happen, who has the medical jurisdiction, who does this, who does that,' and we talked about it and talked about it, and he helped me out a lot." [16] Might Brown and Rosenberg have been implying they had been preparing for a training exercise due to take place on 9/11?

What is more, as the Washington Post reported, early in the morning of September 11, before the attacks occurred in New York, Rosenberg had been "down on Corridor 8" of the Pentagon (where the DTHC is located), "grateful for an uninterrupted hour in which he could study a new medical emergency disaster plan based on the unlikely scenario of an airplane crashing into the place." [17] Could he have been studying this in preparation for an exercise that day, which would be based on a plane crashing into the Pentagon?

PRE-9/11 PLANE CRASH EXERCISES
Extraordinary as this possibility may sound, it would not have been the first time the DTHC participated in such a drill. The clinic had been involved in at least two training exercises in the 12 months prior to 9/11, based around the scenario of an aircraft crashing into the Pentagon. The DiLorenzo Clinic's Action Response Team (DART) had been developing a new MASCAL plan and, for that purpose, participated in several large tabletop exercises with other organizations such as the Federal Emergency Management Agency (FEMA) and civilian medical agencies. [18]

In late October 2000, Lorie Brown and others from the DTHC took part in the Pentagon Mass Casualty Exercise, held in the Office of the Secretary of Defense conference room. One of the scenarios practiced for was a passenger aircraft crashing into the Pentagon, with 341 victims. [19] And in May 2001, the DTHC held an exercise along with the Air Force Flight Medicine Clinic and Arlington County Emergency Medical Services, which practiced for the scenario of an airplane with 35 passengers on board crashing into the Pentagon's west face--the same side as was impacted in the attack on 9/11. [20]

We therefore have evidence indicating the DiLorenzo Tricare Health Clinic was due to hold a training exercise on September 11, and that this exercise may have been based around the scenario of a plane hitting the Pentagon. Certainly this possibility is something that needs to be urgently examined as part of a new investigation of 9/11. If a training exercise was scheduled to take place at the Pentagon that day, what precisely did it involve? When was it due to start? Who planned it? And why has its existence never been publicly admitted?