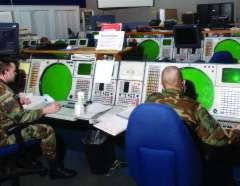 In April 2006, journalist Michael Bronner received in the post 30 hours of recordings he had requested from the Pentagon. These recordings, which came as a series of computer audio files on three CDs, had captured events on the operations floor at NORAD's Northeast Air Defense Sector throughout the day of September 11, 2001. [1] NORAD--the North American Aerospace Defense Command--is the military organization responsible for monitoring and defending the airspace of North America. Its Northeast Air Defense Sector (NEADS), based in Rome, New York, is responsible for monitoring and protecting 500,000 square miles of airspace above the northeast U.S., including the airspace over New York City and Washington, DC. [2] It was within this airspace that the 9/11 attacks occurred, and from the NEADS operations floor that the U.S. military's response originated. Evidence of what happened there that day is clearly in the public interest and of obvious importance for attempts to unravel how the attacks were able to succeed. In an August 2006 Vanity Fair article based on the recordings, Bronner therefore referred to these "NORAD tapes" as "the authentic military history of 9/11." [3]

However, the NORAD tapes are not the only record of the actions of NORAD and its Northeast Air Defense Sector on September 11. In her recent book Touching History: The Untold Story of the Drama that Unfolded in the Skies Over America on 9/11, commercial pilot and author Lynn Spencer revealed the existence of other crucial documentation. Yet, more than seven years on from 9/11, this record remains unreleased to the public and its contents are almost completely unknown.

Spencer described how, at around 9:25 a.m. on September 11, Master Sergeant Joe McCain, the mission crew commander technician at NEADS, received a call from the Continental U.S. NORAD Region (CONR) headquarters at Tyndall Air Force Base in Florida. Major General Larry Arnold and his staff at Tyndall had been trying to gather information about the ongoing crisis, and wanted to know the transponder codes for the two fighter jets that had been launched in response to the first hijacking. The CONR officer that made the call told McCain to "send [the transponder codes] out on chat." By "chat," he meant NORAD's computer chat system. [4]

NORAD'S COMPUTER CHAT SYSTEM
According to Spencer, the chat system used by NORAD that day was "similar to the chat rooms on most Internet servers, but classified." It had three chat rooms that could be used by anyone with proper access. One room was specifically for NEADS, and connected its ID, surveillance, and weapons technicians to its alert fighter squadrons, and was where NEADS received status reports on fighter units and their aircraft. Another chat room was for CONR, and was where its three sectors--NEADS, the Western Air Defense Sector (WADS), and the Southeast Air Defense Sector (SEADS)--communicated with each other and could "upchannel" information to CONR headquarters. The third room was the Air Warfare Center (AWC), where senior NORAD commanders from the three NORAD regions--CONR, Canada, and Alaska--communicated with each other. Although NEADS was allowed to monitor this room, it could not type into it. [5]

Furthermore, when a training exercise was taking place, one or two additional chat windows would be open specifically for communicating exercise information, so as to help prevent it being confused with real-world information. [6] This fact is of particular significance, as the whole of NORAD, including the staff at NEADS, was involved in at least one major training exercise the morning of 9/11. The annual "Vigilant Guardian" exercise has been described as "an air defense exercise simulating an attack on the United States," and was scheduled to include a simulated hijacking that day. [7] According to Larry Arnold, who was the commanding general of NORAD's Continental U.S. Region, this exercise was only canceled after the second World Trade Center tower was hit at 9:03 a.m. [8]

PAPER LOGS DOCUMENT COMMUNICATIONS
NORAD kept paper logs of the communications that took place in its computer chat rooms. As Spencer described, at NEADS it was Joe McCain's responsibility "to monitor the chats and keep paper logs of everything that is happening. ... These chat logs help to keep everyone on the same page, but in a situation like the one unfolding [on 9/11] they have to be updated almost instantaneously to achieve that end." [9] These logs are actually referred to in the notes at the back of the 9/11 Commission Report. However, this is only in relation to a single communication made across the chat system. As the report described: "At 10:31, General Larry Arnold instructed his staff to broadcast the following over a NORAD instant messaging system: '10:31 Vice president has cleared to us to intercept tracks of interest and shoot them down if they do not respond per [General Arnold].'" [10] This detail makes clear that crucial information was being communicated in the NORAD chat rooms. Yet, to date, we know practically nothing about what else was being discussed in them.

Clearly, the details of the NORAD chat logs for the day of 9/11 need to be made public and must be carefully examined. They may not tell us the full story of the U.S. military's response to the attacks, nor give us all the answers we require about why the military failed so catastrophically to protect the nation. But they will surely fill a large gap in the puzzle.