"We're Next": Who Gave the Warning to "Stay off the E-Ring" of the Pentagon? 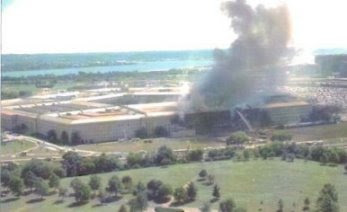 On September 11, 2001, NBC News Pentagon correspondent Jim Miklaszewski was the first reporter at the scene to relay that the Pentagon had been attacked. In a 9:39 a.m. report, he said, "[J]ust a few moments ago ... there was an explosion of some kind here at the Pentagon." After describing what he was seeing and hearing around him, Miklaszewski added: "[I]nterestingly enough, one intelligence official here in the building said [that] when he saw what appeared to be the coordinated attack on the World Trade Center, his advice was to stay away from the outside of the building today, just in case." [1]

Miklaszewski later described this incident again for a book. He recalled that, while heading down the hallway at the Pentagon, he'd "ran into a Defense official who said he didn't know anything specific about the attack yet. But it was so coordinated, he said, 'If I were you I would stay off the E-ring today, because we're next.'" According to Miklaszewski, this official "had no specific information; that was just his gut instinct." [2]

This raises serious questions. Firstly, who was this Defense Department intelligence official? Secondly, why did he think the Pentagon was going to be hit next? After the attacks in New York occurred, Paul Gonzalez, a supervisor in the Defense Intelligence Agency comptroller's office, had in fact reassured his colleagues that the Pentagon was "probably the safest building in the world." No steps were being taken to evacuate the building or alert its employees to any danger. [3] Yet the official that spoke to Miklaszewski thought it would be a target.

Most importantly, why did he specifically warn Miklaszewski to "stay off the E-ring," meaning the outermost of the five concentric rings that make up the Pentagon? Even if we believed that it really was just his gut feeling that the Pentagon would be a target, how could he have guessed the E-ring was at risk? As David Ray Griffin has pointed out: "Assuming that terrorists in control of a Boeing 757 would want to be certain of hitting [the Pentagon], why would they aim at one of the facades, which are only 80 feet high, when they could have simply dived into the roof, which covers 29 acres? More important, one would assume that they would have wanted to cause as much damage to the Pentagon and kill as many of its employees as possible, and these aims would also have made the roof the logical target." [4] So surely if someone had feared an attack on the Pentagon based solely on gut feeling, they would have been most afraid that the roof would be hit. The fact that this Defense Department official believed the E-ring was the likely target suggests he had some kind of specific foreknowledge, and not just a "gut instinct."

While the available evidence is far from conclusive, this indication of foreknowledge is one of the many things that ought to be looked into when there is a proper investigation of 9/11.

Posted by Shoestring at 12:54 No comments: