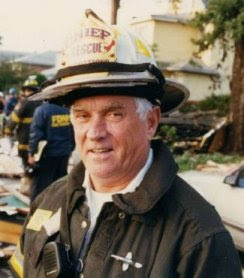 Right after the first World Trade Center tower collapsed, at 9:59 a.m. on September 11, 2001, Father John Delendick--one of New York Fire Department's chaplains--ran down a ramp to below the nearby World Financial Center, so as to escape the dust cloud. There he met with Deputy Chief Ray Downey, the head of the FDNY's Special Operations Command. Delendick asked Downey if the jet fuel from the plane had blown up, thus causing the South Tower to collapse. According to Delendick, Downey "said at that point he thought there were bombs up there because it was too even." [1]

Coming from a senior firefighter, this claim is significant enough. But it is even more so because Downey was no ordinary firefighter. Prior to 9/11, he had "commanded rescue operations at many difficult and complex disasters, including the Oklahoma City Bombing, the 1993 World Trade Center Bombing, and many natural disasters worldwide." [2] As the chief of the FDNY Special Operations Command, he'd pioneered techniques for urban rescue and responding to terrorist attacks. "He was so respected, so beloved," according to CBS News, that "his men nicknamed him 'god.'" [3]

Of most importance is that one of Downey's areas of expertise was building collapses. 9/11 Commissioner Timothy Roemer referred to Downey as a "very, very respected expert on building collapse." [4] Robert Ingram, a battalion chief in the New York Fire Department, has called him "the premiere collapse expert in the country." [5] And Fire Chief Mike Antonucci, who was a best friend of Downey's, said he "was probably the most knowledgeable person on building collapses there was. That was his [hobby], to study building collapses--what affected the engineering of buildings, how they [would] weaken and how he could respond and stay safe." [6]

And this 39-year veteran of the New York Fire Department, who was the most highly decorated firefighter in its history, initially believed the South Tower had come down due to explosives, because the collapse had been "too even." Unfortunately, Ray Downey is not with us today, as he was killed when the North Tower collapsed at 10:28 a.m.