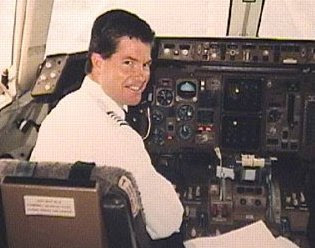 According to the official account of 9/11, American Airlines Flight 77--which supposedly crashed into the Pentagon--was hijacked shortly after 8:51 a.m. on September 11, 2001. This claim is so central to the U.S. government's story that we would reasonably expect it to have been proven. Yet a closer analysis of the evidence shows that, in fact, it appears preposterous.

THE TOUGH PILOT
The first thing to recognize when evaluating the official Flight 77 story is that the plane's pilot was a former military man, and a genuinely tough guy. Captain Charles "Chic" Burlingame had graduated from the United States Naval Academy in 1971. He served eight years on active duty as a fighter pilot, and served several tours at the Navy's elite Top Gun school. He then spent 17 years in the Naval Reserve before retiring from the military in 1996. [1] During his military career, he had tours in Vietnam and the 1991 Gulf War. [2] His sister Debra Burlingame described him as "a guy that's been through SERE [Survival Evasion Resistance Escape] school in the Navy and had very tough psychological and physical preparation." She said, "If there was any chance of saving [Flight 77], this was the kind of guy who would have been able to do that." [3] Admiral Timothy Keating was a good friend of Burlingame's, having been a classmate of his in the Navy and attended flight school with him. He told CNN: "I was in a plebe summer boxing match with Chic, and he pounded me. ... Chic was really tough." [4] Even up to his death Burlingame enjoyed boating, in-line skating, and weightlifting, and was "in great shape," according to his friend Steve Brooks. [5]

Surely it would take a particularly formidable team of terrorists to wrestle control of a plane from a man like this? Yet here is where the official story falls apart at the first hurdle. The supposed hijackers in fact appear to have been a group of weaklings.

THE FEEBLE HIJACKERS
The five men who allegedly hijacked Flight 77 comprised of a pilot, Hani Hanjour, and four "muscle" hijackers who'd been tasked with storming the cockpit and controlling the passengers: Majed Moqed, Khalid al Mihdhar, Nawaf al Hazmi, and his brother Salem al Hazmi. However, as the 9/11 Commission pointed out, "The so-called muscle hijackers actually were not physically imposing," with the majority of them being between 5'5" and 5'7" in height, "and slender in build." [6] As their ID cards have revealed, Salem al Hazmi was just 5'4" tall and Khalid al Mihdhar's was 5'6". [7]

Between September 2 and September 6, 2001, about a week before the attacks, the five alleged hijackers attended Gold's Gym in Greenbelt, Maryland, where, reportedly, they were "awkwardly lifting weights and using resistance machines." [8] Gold's Gym regional manager Spero Courtis has described, "They seemed not to really know what they were doing." [9] According to Gene LaMott, the CEO of Gold's Gym International Inc.: "They weren't on the masculine side. They looked like students from the university." [10]

Heading this group of supposed mass murderers was Hani Hanjour, the alleged suicide pilot said to have crashed Flight 77 into the Pentagon. This 29-year-old from Saudi Arabia was "barely over 5 feet tall, skinny and boyish," according to the Washington Post. [11] Not only was he physically unimposing, he was also quite a nice man, according to several people who met him. In spring 1996, he'd stayed for a month in Miramar, Florida, in the home of Adnan Khalil, a Saudi professor at a local college, and his wife Susan. The Khalils have recalled Hanjour being "mousey and gentle, with a weak personality." Susan Khalil has commented, "I didn't get the feeling that he hated me or hated Americans." [12] He also liked children. Susan Khalil recalled, "He was very kind and gentle to my son, who was 3 years old." [13] Early in 2001, Hanjour attended the JetTech flight school in Phoenix, Arizona. [14] According to Marilyn Ladner, a vice president at the Pan Am International Flight Academy, which operated the school: "The staff thought he was a very nice guy. ... There was no suspicion as far as evildoing." [15] After 9/11, Abulrahman Hanjour, Hani's older brother, described the family's feelings: "We thought that he liked the USA. ... I would think he would give his life to save lives, not to do this." [16]

THE IMPOSSIBLE HIJACKING
Yet this apparently sweet and gentle little man, along with his four physically unimposing colleagues, are meant to have become a gang of killers on 9/11. Here, in the words of the 9/11 Commission, is what they are alleged to have done: "Between 8:51 a.m. and 8:54 a.m., the hijackers began their takeover of the aircraft. They initiated and sustained their command of the aircraft using knives and box cutters (reported by one passenger) and moved all of the passengers (and possibly crew) to the rear of the aircraft (reported by one flight attendant and one passenger)." However, "Neither of the firsthand accounts to come from Flight 77, from a flight attendant and from a passenger, mentioned any actual use of violence (e.g., stabbings) or the threat or use of either a bomb or Mace." [17] I guess we are supposed to believe the passengers and crew were so terrified by these puny little men that they just submitted to them without a fight.

Charles Burlingame and his co-pilot David Charlebois appear to have lost control of Flight 77 within the space of just a few minutes. At 8:54, three minutes after its last routine radio communication, the plane veered off its assigned course. Two minutes later, its transponder--a small radio transmitter that sends information about a plane to controllers--was switched off. [18] In other words, five short, weak men were supposedly able to seize control from Burlingame--a highly trained former military man who enjoyed weightlifting and was described as "really tough"--in about three minutes.

Although neither of the two alleged callers from Flight 77 mentioned any violence having occurred, Burlingame's younger brother Mark has commented: "I don't know what happened in that cockpit, but I'm sure that [the hijackers] would have had to incapacitate [Charles Burlingame] or kill him because he would have done anything to prevent the kind of tragedy that befell that airplane." [19] Burlingame's friend Timothy Keating remarked that "the terrorists had to perform some inhumane act to get him out of that cockpit, I guarantee you." [20] And indeed, according to Virginia Senator John Warner, "the examination of his remains ... indicated Captain Burlingame was in a struggle and died before the crash, doing his best to save lives on the aircraft and on the ground." [21] Former Senator George Allen said the FBI had determined that Burlingame was bludgeoned to death. [22]

This story is ridiculous. There is no way five weaklings could have seized control of Flight 77, in the process beating Charles Burlingame to death, all within a few minutes. The most crucial questions therefore remain uninvestigated and unanswered: Who really killed Charles Burlingame? And what actually happened that day?

It is so simple, Charles Burlingame mostly was attacked from behind while he was sitting on his seat. From that postion it is difficult to fight.