Bombs in the Pentagon on 9/11? Witness Accounts Raise Questions 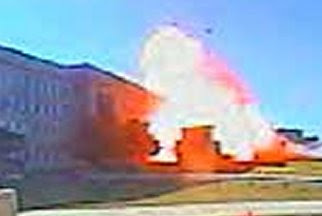 Several accounts reveal that some witnesses who were at the Pentagon when it was attacked on 9/11, and located close to where the building was struck, initially were quite sure a bomb--or bombs--had gone off. These accounts are particularly notable since these individuals were members of the armed forces, and therefore familiar with what explosives sounded and felt like. While they may not tell us anything conclusive, these reports raise questions about what actually happened at the Pentagon that morning:

• John Thurman, a U.S. Army lieutenant colonel, was in a second floor office just above where the Pentagon was hit. He has described the attack: "To me it didn't seem like a plane." Although he was aware that aircraft had hit the World Trade Center, he has recalled: "[T]o me, it seemed like it was a bomb. Being in the military, I have been around grenade, artillery explosions. It was a two-part explosion to me. ... [I]t seemed like that there was a percussion blast that blew me kind of backwards in my cubicle to the side. And then it seemed as if a massive explosion went off at the same time." He described what happened next: "[I]t just felt like this rolling earthquake going on underneath me. And in reflection, I realize that it was the plane that was actually underneath me. But at the time, again, I had thought that perhaps the terrorists had surreptitiously gotten construction workers to come in and place explosives, and they had perhaps commanded--detonated them synchronous with what was going on in New York." [1]

• Lieutenant Nancy McKeown ran a small meteorological unit in the Navy Command Center on the first floor of the Pentagon's D Ring--an area that was mostly destroyed when the building was hit. She described the attack: "[T]he building started to vibrate and things started to fall. And it initially felt like an earthquake. As the, as time progressed, the shaking of the building got violent. The noises got louder and louder." She added, "It sounded like a series of explosions going off." A colleague yelled out, and she "yelled back, bomb." When asked about the incident, "At that point you thought a bomb had gone off in the Pentagon?" McKeown replied: "That's correct. It sounded like a series of bombs exploding, similar to like firecrackers when you light them and you just get a series going off. But they got very loud, very extensive." [2]

• Army Major Craig Collier and his colleagues were in their second floor office, about 200 feet from where the Pentagon was hit. Collier described the moment of the attack: "[T]he building jolted and we heard a muffled boom, then a rumble. ... All of my peers in the area are experienced combat arms officers, and we quickly agreed that it sounded and felt like a bomb." [3]

Considering these accounts, it is perhaps interesting to note the following description of the physical effects of the attack, which was given in the U.S. Department of Defense's book Pentagon 9/11: "The Jet A fuel atomized and quickly combusted, causing explosive bursts as the plane hurtled into the building. A detonation 150 feet inside the building resulted from a 'fuel-air' explosion after the Jet A tanks disintegrated on impact. Here, as elsewhere, there was no uniform pattern of death and destruction. The vagaries of the fuel-air explosions and freakish blast effects meant deaths occurred randomly inside the Pentagon, with the occupants of seemingly more secure interior offices sometimes suffering worse fates than those nearer the outside wall." [Emphasis added] [4]

While these accounts provide us with no clear answers, they do show, again, why we need a proper investigation of 9/11--one that will include a thorough and unrestrained examination of what happened at the Pentagon that day.