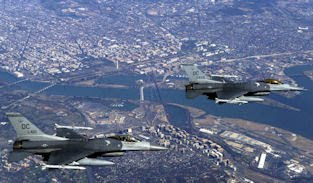 The 911-commission report tells us, that shortly after the second attack, the secret service (Garabino) phoned the FAA Headquarter (Steenbergen). Then Steenbergen should hav told Garabino of more hijacked planes. Now lets go the 911/interviews:

According to Garabino, shortly after the second aircraft hit, he phoned Steenbergen. Steenbergen told him of 4 hijacked planes, two outstanding heading towards Washington D.C.
http://www.scribd.com/doc/14353654/DH-B5-Secret-Service-Requests-Fdr-Entire-Contents-5-Withdrawal-Notice-Doc-Req-Notes-Garabito-Shortly-After-9am-FAA-Van-Steenbergen-Said-4-Planes

According to Steenbergen, 30 seconds after the second aircraft hit, Garabino phoned him and gave him "all information", Steenbergen says, that he was fed / informed by Garabino. After my understanding, "all information" includes the two hijacked planes heading toward Washington.
http://www.scribd.com/doc/17218142/T8-B6-FAA-HQ-Terry-Van-Steenbergen-Fdr-33004-MFR-875

We have here a clear evidence of foreknowledge of the secret service, when we take steenbergen account as true.

According to the official account, after this phone call Garabino failed to warn Cheney against the two planes. Cheney should not be evacuated.
According to the official account, the secret service was not able to contact Andrews station, too.
And of course:
How should the FAA, Steenbergen guessed rightly, 30 seconds after the second crash, of 2 additional hijacked planes heading towards D.C?

When one takes the account of Steenbergen, and sees, that he was informed by the secret service, then everything fits in the picture:

The interview with Steenbergen gives the answer:

After hearing from Garabino, Steenbergen gave orders, to clear the airspace over Washington D.C. for non-airliners shortly after 09:06 am. Lynn Spencer confirmed that information, she got it from several controllers during interviews.
The answer is:
= The secret service informed the FAA, because the secret service was afraid of an accident of the hijacked planes with another plane.=