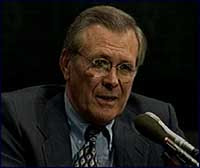 May 23-24, 2001: Rumsfeld Warns of Inevitability of Strategic Surprise; Refers to Pearl Harbor
During a meeting with the House Armed Services Committee, Secretary of Defense Donald Rumsfeld says that the inevitability of surprise is a guiding principle of the Bush administration's national security strategy. To emphasize his point about the need to prepare for the unexpected, he gives panel members copies of the foreword to Roberta Wohlstetter's 1962 book, Pearl Harbor: Warning and Decision. This foreword, written by Thomas Schelling, argues that in order to prepare for the next crisis, the US military needs to avoid thinking that the most familiar threat is also the most likely one. Rumsfeld says that, in line with this reasoning, a key element of the administration's strategy will be preparing for the unexpected. [US Department of Defense, 5/23/2001; Associated Press, 5/24/2001] The following day, he has a similar closed-door meeting with the Senate Armed Services Committee. He hands out to senators a four-page paper dealing with the inevitability of strategic surprise, and summarizing various defense surprises and incorrect predictions made during the 20th century. The paper states that the Department of Defense should "give some thought to the flexibility of a capability-based strategy, as opposed to simply a threat-based strategy." What this means, according to the Washington Post, is that the "US military needs to move away from a Cold War structure designed to counter one large, clear threat--from the Soviet Union--and to develop capabilities to respond to everything from ballistic missiles to terrorist attacks." [NPR, 5/25/2001; Washington Post, 5/25/2001] Rumsfeld had previously warned of the danger of a surprise attack, like Pearl Harbor, during his confirmation hearing in January (see January 11, 2001). Journalist Bob Woodward will later report that one of the main themes Rumsfeld referred to in the eight months prior to 9/11 was surprise, and he had "routinely handed out or recommended" Wohlstetter's book on Pearl Harbor. [Woodward, 2002, pp. 22-23] Yet when, in July, he receives a CIA briefing about the imminent danger of an al-Qaeda attack on an American target, Rumsfeld reportedly responds with "vehement dismissal," and criticizes the CIA for its "gullibility" (see July 11-17, 2001). [Cockburn, 2007, pp. 9]
Source
Posted by Shoestring at 13:30