New Details About The 9/11 Mystery Plane 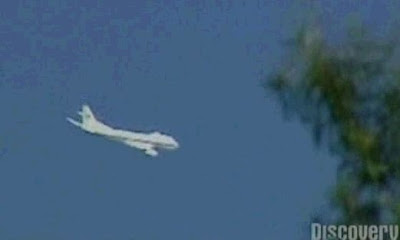 The morning of 9/11, CNN reported a mystery jet plane flying above Washington, DC. At 9:54 a.m., correspondent John King, who was standing near the White House, reported that about ten minutes earlier (hence, around 9:44 a.m.), there was "a white jet circling overhead." He added: "Now, you generally don't see planes in the area over the White House. That is restricted air space. No reason to believe that this jet was there for any nefarious purposes, but the Secret Service was very concerned, pointing up at the jet in the sky. It is out of sight now, best we can tell." [1] Shortly after, another CNN correspondent, Kate Snow, also reported having seen a plane, "circling over the Capitol" building at around the same time. She said: "Now whether that may have been an Air Force plane, it's unclear. But that seemed to be the reason, according to security guards that I talked with, towards the evacuation of the Capitol." [2]

Yet the identity of this "white jet" aircraft has been a mystery. Indeed, there has been virtually no discussion of its existence, even though it was flying above Washington at a time when America was under attack, and when the only aircraft in the area should have been fighter jets, there to protect against possible further attacks. The 9/11 Commission, which claimed that its aim had been to present "the fullest possible account of the events surrounding 9/11" appears not to have investigated the identity of this plane, and made no mention of it in its final report.

THE MYSTERY PLANE IDENTIFIED
In his recent Internet article "The 9/11 Mystery Plane," Mark H. Gaffney presented compelling evidence--including a clear photo and video footage--indicating that this "white jet" had in fact been an E-4B National Airborne Operations Center (NAOC) plane. These are highly modified Boeing 747s that act as flying military command posts. [3]

Important new evidence corroborates Gaffney's conclusion, and raises further questions about the role played by the E-4B planes on 9/11. This evidence appears in the 2003 book Black Ice: The Invisible Threat of Cyber-Terrorism, written by Dan Verton, a former intelligence officer in the U.S. Marine Corps and former senior writer for Computerworld magazine, who has written extensively on national security, the intelligence community, and national defense topics. Verton reported that, the morning of September 11, an E-4B was launched from "an airfield outside of the nation's capital." (He did not, however, state which specific base.) This plane was carrying "civilian and military officials," and was going "to conduct a previously scheduled Defense Department exercise." This exercise would involve "the use and testing of the aircraft's various advanced technology and communications equipment."

According to Verton, the E-4B launched from near Washington "had only just taken off" at the time of the Pentagon attack, which was at 9:37 a.m. This would mean it could, quite plausibly, have been circling above the White House and Capitol building at around 9:44 a.m., when CNN's John King and Kate Snow spotted a plane up above. Verton adds that, once airborne, the E-4B "was immediately ordered to cease the military exercise it was conducting and prepare to become the actual national airborne operations center." [4]

GLOBAL GUARDIAN
The exercise the E-4B was participating in would have been Global Guardian, which was being conducted at the time by the U.S. Strategic Command (Stratcom), to test its ability to fight a nuclear war. The Omaha World-Herald has reported that three National Airborne Operations Center planes were airborne the morning of 9/11 for this exercise. Following the attacks, all three remained in the air. [5] According to the World-Herald, Global Guardian was canceled after the second WTC tower was hit, at 9:03 a.m. [6] This is what we would logically expect, since it was quite obvious by that time that America was under attack, and an ongoing massive war exercise could, presumably, have led to great confusion within the military about what was real and what was just simulation. Yet, according to Verton's account, it was only around the time of the Pentagon attack that the E-4B launched near Washington was ordered to stop the exercise. This would therefore have been over half an hour after the second attack had occurred. If Verton is correct, we need to know why there was such a delay in pulling this aircraft out of the exercise.

DOOMSDAY PLANES
It is important to note that the E-4B is no ordinary aircraft. It is a militarized version of a Boeing 747-200, equipped with advanced communications equipment, and capable of carrying a crew of up to 112 people. Nicknamed "Doomsday" planes during the Cold War, E-4Bs serve the president, the secretary of defense, and the Joint Chiefs of Staff. In times of national emergency, they can act as highly-survivable command, control, and communications centers to direct forces, execute war orders, and coordinate actions by civil authorities. The U.S. military possesses four of them in total. One is always kept on alert, with a full battle staff. Offutt Air Force Base in Nebraska is the "Main Operating Base" for the E-4B, though there are also numerous "Forward Operating Bases" (FOB) throughout the U.S. [7]

As well as the three E-4Bs in the air the morning of September 11 due to the Global Guardian exercise, what appears to have been the fourth of these planes--presumably the one kept on alert--was apparently activated and launched simply in response to the attacks. Reportedly, minutes after the attack on the Pentagon, it took off from Wright-Patterson Air Force Base, near Dayton, Ohio, bound for an undisclosed location. The plane returned to the base at some unspecified time later on in the day. [8] Like the E-4B launched near Washington, little attention has been paid to this aircraft and what its purpose was on 9/11. Again, no mention was made of it in the 9/11 Commission Report.

This highlights the fact that, approaching the sixth anniversary of the attacks, we still only really know a very small fraction of what was going on during the day of 9/11. As Mark Gaffney rightly concludes, there is an "urgent need for a new 9/11 investigation: It must be nonpartisan, independent, adequately funded, and empowered with the authority to subpoena witnesses." [9]