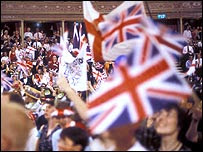 In his 1998 book Who Killed Diana? Simon Regan presents a clear definition of what the British establishment is. He also describes a "Super-Establishment" -- a ruling elite that, despite being entirely unelected, retains significant power over how Britain is governed.

Simon Regan was an investigative journalist who, after having worked with various newspapers in Britain and overseas, in 1989 founded the anti-establishment magazine Scallywag. He was the editor of this magazine during its short existence in the early 1990s.

In Who Killed Diana? Regan writes: "Only when I launched Scallywag and really began looking into how Britain is run did I ever even envisage how manipulated we all are. And how innocent we are to that manipulation." [1] To learn about the establishment, and how government really takes place, is to learn about this manipulation of the general public.

THE PYRAMID OF POWER
To define what the "establishment" is, Regan outlines a "pyramid theory" of how British society is made up. At the base of the pyramid, forming its wide foundation, "is the proletariat--ordinary people like you and me." According to Regan: "In a democracy, ideally, the basic structure dominates the rest of the pyramid. Without us, at least, it is logical to suppose that the entire edifice would topple."

Next up the pyramid, on the middle stratum, "are the people who appear to make the country tick. The universities and academics, the church, the City and the (in particular Tory) press." Then above this is the government itself, including "top-level police officers, the judiciary [and] senior echelons of the armed forces." It is in this level of the pyramid "that the old school tie, gentlemen's clubs, and probably the Freemasons are most prevalent."

To most people, this government level of the pyramid represents the "establishment." However, there is a topmost level above it, which really controls the country. "The base of the pyramid hardly knows they exist." [2]

THE SUPER-ESTABLISHMENT AND THE ROLE OF THE INTELLIGENCE SERVICES
Regan writes that it is Whitehall, where most government ministries are located, "which really runs the country with a close-knit Mafia-like clique, which forms a sort of uncontrolled Super-Establishment." This "Super-Establishment" is made up of "a handful of powerful, but low-key, City brokers and financiers; definitely the top brains at the Foreign Office, the Treasury, the Ministry of Defence and the Trade Department. Key figures in the security forces--although not necessarily the top person--would be included, and so would at least one key member of the prime minister's secretariat." At least until recently, it would also have included the top courtiers who "run" the royal family.

While the police and judiciary might not be directly part of this clique, "through the Home Office they can certainly be manipulated." The Super-Establishment's power is based upon its ability to manipulate the level below it--the individuals that most people believe are governing our country. The elected government, in fact, "is almost irrelevant" to the overall power of the Super-Establishment.

The world in which the Super-Establishment exists is "a grey and murky world in which sensitive matters of state are planned and executed in gentlemen's clubs (Reform and Oxford and Cambridge preferred). It is where manipulation plots are hatched. Whether it be manipulation of a certain minister towards a certain viewpoint, or the wholesale orchestration of a Foreign Office ploy to bring down a foreign government." Regan calls this secretive form of government "twilight politics," because "it never enjoys the slightest glare of sunlight. And if it is ever in danger of doing so, manipulation normally sorts it out."

Regan continues that it is "very much within the interests" of the Super-Establishment "to protect the status quo." In fact, it is "almost the divine mission of the secret services in the UK to protect the status quo, and hitherto it has been their full intention to thwart anyone who tried to disrupt it. It is a scary combination of unofficial officialdom and a blind trust that they have got it right and everyone else has got it wrong and is in need of their 'protection.'" [3]

THE POWER OF THE SUPER-ESTABLISHMENT
Regan concludes: "[T]he actual existence of the Super-Establishment is not a flight of fancy. It really does exist. It is entirely manipulative and, even under the guise of democracy and being 'answerable' to the government," it exercises "a great deal of power behind the scenes." Even the British monarchy "is a sham power. All of the royals, but particularly [Prince] Charles, are constantly manipulated by a small clique of very powerful mandarins and courtiers who in turn work hand-in-glove with top civil servants in such ministries as the Foreign Office." [4]

It is no wonder that the world is in such a mess.