'Deaf, Dumb, and Blind': Were Communications Sabotaged on 9/11? 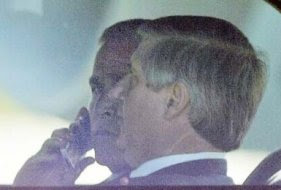 On September 12, 2001, the commander in chief of the Russian air force, General Anatoly Kornukov, offered his thoughts on the previous day's events: "Generally it is impossible to carry out an act of terror on the scenario which was used in the USA yesterday. ... The notification and control system for the air transport in Russia does not allow uncontrolled flights and leads to immediate reaction of the anti-missile defense. As soon as something like that happens here, I am reported about that right away and in a minute we are all up." [1] One would assume the defenses of the United States should have been more effective than those of Russia. Yet the 9/11 attacks seem to have proceeded with ease, and America's air defenses appear to have been almost non-existent at the time they were most needed.

While we still do not know exactly what caused this, evidence indicates that various methods were used to sabotage normal crisis responses, hence creating a state of paralysis. [2] Further evidence now shows that in the Washington, DC area (and elsewhere), various means of communication--including cell phones, secure government phones, and military radios--were not working properly on September 11, thus creating a communications blackout.

These problems hindered top government officials, members of the military, and emergency responders, as well as members of the public. A classified report was later produced, based on observations from a National Airborne Operations Center plane that was in the air that morning. According to author Dan Verton, this report "does not paint a favorable picture of the government's overall crisis management capabilities. According to one government official, the nation was 'deaf, dumb, and blind' for much of that horrible day in September." [3] The question we need to investigate is, were communications deliberately sabotaged, thereby helping to paralyze normal defenses and crisis management capabilities?

THE PENTAGON
Of particular concern is that communications were so badly affected around the Pentagon, which, as the headquarters of the U.S. Department of Defense, had a crucial role to play that morning. These problems were summarized in the 2002 Arlington County After-Action Report on the Response to the September 11 Terrorist Attack on the Pentagon. This found that when the Pentagon was hit at 9:37 a.m., "all area communications seemed simultaneously overwhelmed. Firefighters calling the [Arlington County Emergency Communications Center] couldn't get through. Relatives of Pentagon workers found cellular and land lines jammed." The report added: "Cellular and landline telephone communications were virtually unreliable or inaccessible during the first few hours of the response." [4]

Furthermore, "Emergency traffic jammed radio channels." This is apparent in the account of Officer Aubrey Davis of the Pentagon police. Davis accompanied Secretary of Defense Donald Rumsfeld to the crash site immediately after the Pentagon was struck. Davis's radio was "crackling with frantic pleas from his control room regarding Rumsfeld's whereabouts." However, Davis has recalled: "I kept saying, 'We've got him,' but the system was overloaded, everyone on the frequency was talking, everything jumbled, so I couldn't get through and they went on asking." [5]

The problems didn't just occur around the Pentagon. Considering its role as a center of government, it is alarming that communications were also badly hit in the Washington, DC area in general. Numerous government officials were affected:

GEORGE TENET
CIA Director George Tenet was in Washington at the time the first World Trade Center tower was hit, having breakfast at the St. Regis Hotel. After being informed of the attack in New York, he left the hotel to be driven back to CIA headquarters, located about eight miles outside Washington in Langley, Virginia. As Tenet described in his recent memoir: "With all hell breaking loose, it was hard to get calls through on the secure phone. Essentially, I was in a communications blackout between the St. Regis and Langley, the longest twelve minutes of my life." [6]

DENNIS HASTERT
As speaker of the House, Dennis Hastert was third in line for the presidency, behind the vice president. He'd seen the second plane hitting the WTC live on television while in his office suite on the second floor of the U.S. Capitol building, and was then informed that Vice President Dick Cheney would soon be calling him on the secure phone in his office. However, the secure phone was not working properly, and several attempts at calling Cheney were unsuccessful. Hastert has recalled: "On that dreadful day I couldn't make the thing work. No matter what I did, I couldn't connect with the vice president. As the minutes passed, my frustrations grew." It was not until mid-morning that Cheney and Hastert were finally able to speak to each other. [7]

COLIN POWELL
Secretary of State Colin Powell was away in Lima, Peru at the time the attacks occurred. During his seven-hour flight back to Washington, as journalist Bob Woodward described, "Powell found that he couldn't talk to anybody because his communications were connected to the system in the U.S., which was swamped." [8] In a speech at the State Department, Powell later complained: "I never felt more useless in my life than on the morning of the 11th of September. Phones [were] gone because of what happened here and what happened to the [communications] system here in Washington. They couldn't get a phone line through. I was able to get some radio communications--two radio spots on the way back--but for most of that seven-hour period, I could not tell what was going on here in my capital, and I'm the secretary of state!" [9]

PRESIDENT BUSH
Although he was away in Florida for a reading demonstration at a school in Sarasota, President George W. Bush reportedly experienced some serious problems in his attempts at contacting colleagues back in Washington. According to the 9/11 Commission Report: "The president told us he was frustrated with the poor communications that morning. He could not reach key officials, including Secretary Rumsfeld, for a period of time. The line to the White House shelter conference room--and the vice president--kept cutting off." [10] Thomas Kean, the chairman of the 9/11 Commission, has pointed out the significance of this: "That was scary on both sides because the president is the only one who can give certain orders that need to be given." [11]

After he left the school at 9:35 a.m. and was being driven to Sarasota-Bradenton International Airport, Bush was reportedly unable to contact his staff at the White House. According to the CBC, "all the secure telephone lines were down. The communications system [was] overloaded." The president ended up borrowing a cell phone, but reportedly even that did not work. [12]

The problems continued after he got on Air Force One. Despite the plane's elaborate communications equipment, its phones worked only sporadically. At some point later in the morning, the president's closest advisor Karen Hughes tried contacting Bush through the White House switchboard. Hughes has recalled: "[T]he military operator came back to me and in a voice that, to me, sounded very shaken said, 'Ma'am, I'm sorry, we can't reach Air Force One.'" Hughes described this as "a very, very, frightening moment," because "I never had that happen before." [13]

OVERLOAD OR SABOTAGE?
Why were lines of communication jammed at this most crucial time, while America was under attack and in the hours afterwards? The nearest thing to an official explanation seems to be that they somehow overloaded because of the increased volume of calls made by people reacting to the attacks. For example, according to the New York Times, within minutes of the attacks there were "tens of millions of [phone] calls--many from worried relatives and friends--that threatened to clog the system." [14] Similarly, the federally funded Arlington County After-Action Report on the response to the Pentagon attack referred to radio channels that were "initially oversaturated," and to "cellular telephone systems" that were "overloaded and ineffective." [15]

However, another possibility that needs to be properly investigated is that there was a deliberate assault on communications channels, carried out by powerful and treasonous individuals working within the U.S. government and military. This could have been one of the methods used to ensure the 9/11 attacks succeeded. We can see at least three goals this paralysis would have achieved:

1) Loyal and honest government and military employees would be severely hindered in their ability to react to the attacks. It would take longer for them to learn what was happening, and even after they knew, it might be impossible for them to organize an effective crisis response.

2) Officials within the U.S. government and military who were involved in planning and/or perpetrating the attacks could disguise their complicity. While the attacks were taking place, they could act as if they were genuinely trying to organize an emergency response, when in fact they knew that their communications would likely not get through and would be to no avail. For example, George Bush, Dick Cheney, and George Tenet all acted suspiciously on 9/11, and should be investigated as to whether they were in any way complicit in helping plan or perpetrate the attacks. Yet at the time the attacks occurred, all three appeared to be victims of the communication paralysis.

3) By sabotaging communications among members of the public, such as by jamming cell phone signals, the 9/11 perpetrators would have greater control over the flow of information from the scenes of the attacks. They would be better able to put out the official story, and get this well established in the public consciousness, before too much contradictory evidence leaked out.

EPILOGUE: THE FORTUNATE FIRE AT CIA HEADQUARTERS
Considering the communication difficulties experienced on September 11, it is curious to note changes that had recently taken place at the CIA headquarters in Langley. On August 7, 2001, a fire lasting several hours led to the forced evacuation of the old headquarters building and the nearby new headquarters building. The fire was supposedly started when a workman dropped a welder down an elevator shaft, igniting wood at the bottom. Subsequently, A. B. "Buzzy" Krongard, the CIA's executive director at the time, instigated evacuation procedures that were followed by CIA employees in response to the 9/11 attacks a month later. Significantly, he equipped key CIA officials with tiny walkie-talkies, so they could still communicate if cell phones were not working. [16]

Was the CIA just lucky? Or had Krongard known something that the rest of us did not, that there would come a day in the near future when cell phones would not work?