Fake Firefighters and Military Imposters at the Pentagon After 9/11 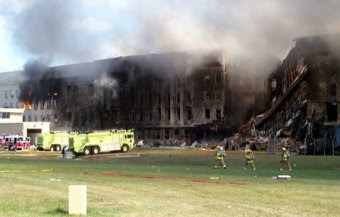 Several entries in the Complete 9/11 Timeline (copied below) describe what appear to have been individuals disguised as firefighters or military personnel, who were involved in the rescue and recovery efforts at the Pentagon following the attack there on September 11, 2001. What these individuals were doing is unknown, but possibilities need to be investigated, such as whether they were there to tamper with, plant, or remove evidence. That this may have been the case is given weight by the fact that some people who appeared to be members of the military were witnessed stealing crash debris from in front of the Pentagon.

Fairly early on in the firefighting operation at the Pentagon, what appeared to be a crew of firefighters was seen behaving completely at odds with how firefighters are trained to act. An Arlington County firefighter working on the building's second floor witnessed the crew walking past burning fires, apparently to get to fires elsewhere in the building. But, as authors Patrick Creed and Rick Newman have pointed out: "Firefighters are trained never to go through a fire without putting it out, since it might seal off your exit. You might as well walk into a burning room and lock the door behind you."

Then, on September 12, the Defense Protective Service (DPS), which guards the Pentagon, arrested three people at the Pentagon who were dressed as firefighters, but were not firefighters.

Beginning that same day, a couple of firefighters involved in the recovery effort were repeatedly assisted by a mysterious man who appeared to work for the military, but who wore no identifying badge and was known to them only as "Johnny." This man said if the firefighters needed anything from the military, he could help them, and even introduced them to some friends of his who said they worked for Special Forces. But on the evening of September 14, Johnny suddenly disappeared. When the two firefighters asked around, they found that no one at the Pentagon knew who "Johnny" was, and none of the agencies involved in the recovery effort said he worked for them. The two firefighters started to wonder if he'd been an imposter who'd perhaps managed to gain access to the site before security had been tightened there.

The presence of these fake personnel raises the question of why they were at the Pentagon. Were these men just "thrill seekers," as the chief of the DPS has claimed, there for their own misguided reasons? Or could they have been at the site for a more sinister purpose, perhaps as part of a coordinated operation to plant or remove evidence from the crime scene?

This latter possibility has some evidence to support it. Shortly after the attack occurred, DPS officer Lt. Robbie Turner saw people apparently stealing plane debris from the road in front of the Pentagon. Turner has recalled, "We had to try to stop other people from pilfering the wreckage because, believe it or not, there were people--military personnel involved--you know, included, rather, that was picking up the wreckage of the plane from off the highway." Another DPS officer, Roosevelt Roberts Jr., worked during the afternoon and evening of 9/11 at the heliport near where the Pentagon was hit. He has recalled that, in that time, "We had a lot of people vandalizing, stealing evidence."

(Between 11:00 a.m. and 12:00 p.m.) September 11, 2001: Mystery Firefighters Seen Behaving Oddly inside Pentagon
A mysterious fire crew is witnessed inside the Pentagon, behaving completely at odds with how firefighters are trained to act. [Creed and Newman, 2008, pp. 137] Chad Stamps is a firefighter with Rescue 104 of the Arlington County Fire Department. [National Fire and Rescue, 5/2002] Along with his crew, he has been fighting fires on the second floor of the Pentagon's outer E Ring. With fires burning around him, he is astonished to see another crew walk past, carrying two packs of hose line, apparently on its way to fight fires elsewhere in the Pentagon. Describing this incident, authors Patrick Creed and Rick Newman will point out: "Firefighters are trained never to go through a fire without putting it out, since it might seal off your exit. You might as well walk into a burning room and lock the door behind you. Yet there they went." Seeing the crew passing by, Stamps thinks, "This is totally disjointed." [Creed and Newman, 2008, pp. 137] The odd behavior of this crew is perhaps notable because there is at least one reported incident of fake firefighters being caught at the Pentagon following the attack there: On September 12, three people will be arrested who are not firefighters, yet who are dressed in firefighting gear (see September 12, 2001). [Goldberg et al., 2007, pp. 170]
Source

September 12, 2001: People Disguised as Firefighters Arrested at Pentagon
The Defense Protective Service (DPS)--the law enforcement agency that guards the Pentagon--arrests three people at the Pentagon who are dressed in firefighting gear but are not firefighters. Further details of who these people are and why they are at the Pentagon are unstated. John Jester, the chief of the DPS, later reflects: "When you have a major event, certain people are like moths around a light bulb. They come to the scene as thrill seekers." Reportedly, incident command, DPS, and FBI officials are worried by the "absence of an effective identification system to control the large number of people that [are passing] through the outer perimeter fence to support firefighting and recovery operations" at the Pentagon. [Goldberg et al., 2007, pp. 170]
Source

September 12-14, 2001: Apparently Fake Military Official Helps with Pentagon Recovery, then Disappears
A mysterious man, who is initially assumed to be working for the military, assists firefighters involved in the Pentagon recovery efforts, but then disappears without trace and is thought to have been an impostor who had managed to slip inside the Pentagon grounds.
"Johnny" - Arlington firefighter Bob Gray is introduced by his colleague Bobby Beer to a man wearing a hard hat. Beer introduces the man only as "Johnny," and adds, "He's our go-between with PenRen [the Pentagon Renovation Program], and he knows some of the military guys too." Although "Johnny" is not wearing any identifying badge or ID, he seems knowledgeable, appears "taut and serious, with a purposeful military stance," and even introduces Gray and Beer to a couple of friends of his who say they work for Special Forces. Johnny says if Gray and Beer need anything from the military, he can help. As a security perimeter has now been set up around the crash site, Gray assumes Johnny must be there officially. [Creed and Newman, 2008, pp. 367-368]
Disappears - Johnny turns out to be very helpful and assists Gray and Beer repeatedly. But, on the evening of September 14, he suddenly disappears. Gray and Beer ask around, but no one at the Pentagon seems to know exactly who Johnny is or what his last name is, and none of the agencies involved in the recovery effort say he worked for them. Johnny's disappearance appears to follow an error he had made after firefighters discovered two bodies inside the Pentagon's E Ring. Johnny mistakenly called the truck used to remove bodies to the temporary morgue prematurely, before FBI agents had the chance to photograph and document the remains. Gray and Beer start to wonder if Johnny in fact had no official standing, and was an impostor.
Clearance - According to authors Patrick Creed and Rick Newman, "It wasn't unusual at high-profile crime scenes for law-enforcement pretenders to show up and insinuate themselves into the work." Johnny would have required "some kind of clearance to get through the concentric security perimeters that sprung up around the building--unless he'd been inside the wire before security tightened. It was possible that he had wandered in at the very beginning and simply stayed--there was enough food, water, and basic support on the scene to survive for days. Somebody who was determined enough to sleep inside one of the tents, or even on the grass, could easily have bypassed security."
Tighter Security - However, the FBI has now become stricter about security, and is ushering out volunteers and scrutinizing anyone without airtight credentials. Gray and Beer conclude that Johnny may have come to the attention of the FBI when he called the body truck, leading agents to inquire who he was, and this could have prompted his disappearance from the Pentagon. [Creed and Newman, 2008, pp. 416-418]
Source

(After 10:15 a.m.) September 11, 2001: Police See People, Including Military Personnel, Stealing Debris from Pentagon Crash Site
Two Pentagon police officers see people--some of them members of the military--stealing crash debris from in front of the Pentagon. After the Pentagon was hit, Lt. Robbie Turner had been helping the injured at a triage area. When, at around 10:15 a.m., reports are received of a possible second plane heading for the Pentagon (see (10:15 a.m.-10:38 a.m.) September 11, 2001), he sets about evacuating people away from there. As this is going on, he later recalls: "[W]e had to try to collect up evidence, as much of the evidence as we possibly could. Take pictures of it or whatever." However, some people are apparently trying to steal plane debris from the road in front of the Pentagon. According to Turner, "[W]e had to try to stop other people from pilfering the wreckage because, believe it or not, there were people--military personnel involved--you know, included, rather, that was picking up the wreckage of the plane from off the highway as we were running away." [Library of Congress, 12/3/2001] Later on in the day, around 3:00 p.m., another Pentagon police officer, Roosevelt Roberts Jr., is called to the heliport near where the Pentagon was hit, and remains there for the next 13 hours. He will recall that, during this time, "we had a lot of people vandalizing, stealing evidence." He does not specify who these people are, or what this "evidence" is that is being stolen and vandalized. [Library of Congress, 11/30/2001]
Source