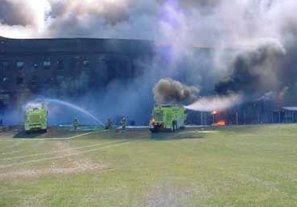 In a recent interview, Assistant Chief James Schwartz of the Arlington County Fire Department (ACFD) revealed an intriguing detail relating to the 9/11 Pentagon attack. Just before the Pentagon was hit, ACFD responded to alarms going off at the USA Today building, located a few miles from there. Yet it is unclear whether there was actually any fire. Other evidence indicates that, as a result of this alarm, when the Pentagon was hit a significant number of fire and medical units were already on the road nearby and available to quickly respond to the attack. Curiously, the two buildings of the USA Today complex were known as the "Twin Towers." [1]

In his interview, Assistant Chief Schwartz told McClatchy Washington Bureau that, after the two towers of the World Trade Center had been hit on September 11, the Emergency Communications Center (ECC), which is the focal point of all police and fire 911 calls for Arlington County, started receiving phone calls from buildings along the Potomac River and along the flight path for Washington's Reagan National Airport. These were made by people concerned about what they should do. Among the callers were the building managers at the USA Today towers, who were afraid their complex might be a terrorist target and wanted to know if they should evacuate it. [2]

The USA Today complex is in Rosslyn, Virginia, just a few miles down the road from the Pentagon. [3] It includes the two tallest high-rise buildings in Arlington County--the "Twin Towers"--the tallest of them being 30-stories high. [4]

Schwartz recalled, "Our communications center, who didn't have a lot of other guidance to give them, told [the USA Today building managers] that if they felt better, based on what they were watching on the television and the situation as it was shaping up then, if they felt better to evacuate the building, then they should in fact do that."

FIREFIGHTERS RESPOND TO USA TODAY BUILDING ALARM
Curiously, Schwartz said: "Shortly after that, we had a fire response for alarm bells at the USA Today building. ... And I was actually dispatched to that building first [before heading to the Pentagon]. By the time I got to the elevator, the transmissions were coming out about the situation as it was unfolding at the Pentagon. I did not go to the USA Today building. I drove directly to the Pentagon." [5]

Schwartz told McClatchy Washington Bureau he believed the USA Today building alarm had gone off because "people who were evacuating decided that they would pull the fire alarm in order to get everybody out of the building, and that initiated a response on our part." [9] But USA Today spokesman Steve Anderson, who was in the building the morning of 9/11, has stated that employees of USA Today and its parent company Gannett only began evacuating after the Pentagon attack occurred, not before it, as would likely have been the case if Schwartz's theory were correct. [10]

FALSE ALARM HASTENS REPONSE TO PENTAGON ATTACK
What, if anything, is the significance of all this? Was it just a coincidence that an alarm sounded for the USA Today building just before the Pentagon was hit? Could the alarm have simply been set off by someone who was panicked by the events in New York, and concerned that this building might be the next target? Or could the incident have a more sinister meaning?

A possible and more disquieting reason why someone might have set off the alarm is suggested by an incident described in a federally funded report on the emergency response to the attack on the Pentagon. The 2002 Arlington County After-Action Report stated, "Just one minute before the Pentagon crash, in response to a 911 telephone call at 9:37 a.m., the [Arlington County Emergency Communications Center] dispatched several [fire and medical] units to an apartment fire at 1003 Wilson Boulevard in Rosslyn." But by the time the first engine arrived there, "the apartment fire was out." [11]

The address of the USA Today complex has been reported as "1000 and 1110 Wilson Boulevard." [12] This would indicate that the alleged "apartment fire" at 1003 Wilson Boulevard and the USA Today building incident described by Schwartz were one and the same thing. What was the result of this apparent false alarm? According to the After-Action Report, "by sheer coincidence, there were a significant number of units already on the road near the Pentagon at the time of the attack." [13]

CRITICAL QUESTIONS
So, at the very least, the setting off of the USA Today building alarm suggests that someone may have had foreknowledge of the Pentagon attack, and wanted to ensure a swift emergency response to it. Establishing who this person, or persons, was will be one of the tasks of a new investigation of the 9/11 attacks. Investigators will also need to establish what exactly this person(s) knew, and from where they gained their foreknowledge.

But might this incident have further significance? We know, for example, that there were numerous training exercises being held or prepared for by the U.S. military and other government agencies on the morning of 9/11. Some of these exercises are known to have had an uncanny resemblance to the actual attacks. [15] Therefore, could there have been an exercise based around the scenario of an aircraft crashing into the "Twin Towers" of the USA Today complex that was scheduled to occur at the same time as the Pentagon was hit? The confusion created by such an exercise could have led to the false alarm of a fire at the complex. Giving some credence to this possibility is the fact that, as well as being the home of USA Today, the Arlington Twin Towers also housed "several Department of Defense employees," according to the Washington Business Journal. [16]

The fact that existing investigations have failed to even consider these questions proves how urgent it is that we now have a proper, unrestrained investigation into 9/11.

I initiated coverage of this blog at
http://friendfeed.com/rooms/9-11-truth
today