The WTC Leaseholder and His Associates That Cheated Death on 9/11: Was it Coincidence or Did Someone Have Foreknowledge of the Attacks? 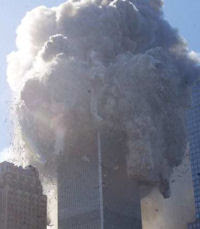 New York real estate developer Larry Silverstein and several key individuals associated with his firm, Silverstein Properties, appear to have had remarkable luck on September 11, 2001, when changes in their schedule or coincidental circumstances saved them from being high up in the World Trade Center when it was attacked.

Silverstein Properties took over the lease of the World Trade Center seven weeks before 9/11, the only time the complex had gone under private control [1], and after 9/11 Larry Silverstein sought damages of over $7 billion from his insurers for the destruction of the Twin Towers. [2] On September 11, the firm had temporary offices on the 88th floor of the North Tower. (American Airlines Flight 11 impacted that tower between its 93rd and 99th floors.) Of its 160 employees, 54 were working in those offices at the time of the attacks and four of them died. [3]

HIGH-LEVEL INDIVIDUALS AVOIDED DANGER ON 9/11
The fortunate circumstances that kept the high-level individuals out of danger the morning of 9/11 were quite extraordinary. Larry Silverstein survived the attacks supposedly because his wife forced him to go to a doctor's appointment instead of a meeting at the WTC; Silverstein's son and daughter survived because, independently of each other, they were running late; his top aide survived because he cut short a meeting he was in at the top of the North Tower; his publicist agreed to join a meeting at the WTC at 9:00 a.m. instead of 8:00 a.m.; and others associated with Silverstein Properties may have avoided danger due to the cancellation of a meeting on the 88th floor of the North Tower.

There are three possible explanations for the combined good fortune of these individuals on September 11. Maybe it was all due to coincidence. Or, more sinisterly, perhaps some of these individuals had foreknowledge of the attacks and therefore knew of the threat to the WTC. Or maybe they received some kind of forewarning from others who had specific foreknowledge of the danger. While it will be impossible to draw definite conclusions until there is a proper investigation, the accounts of these individuals, described below, make clear why such a new investigation into the 9/11 attacks is needed.

WTC LEASEHOLDER PERSUADED TO GO TO DOCTOR'S APPOINTMENT INSTEAD OF TRADE CENTER
After his company took over the lease of the Twin Towers on July 24, 2001, Larry Silverstein reportedly "spent his days at the towers, meeting and greeting his tenants." [4] According to the New York Times, "Every morning after the deal was finalized, Mr. Silverstein held breakfast meetings at Windows on the World," the restaurant at the top of the North Tower. [5] Those meetings would begin at 8:30 a.m. [6]

All of the approximately 170 people in Windows on the World at the time of the attack on the North Tower--8:46 a.m.--died when the tower subsequently collapsed. [7] Yet September 11 was the one morning when Larry Silverstein was not at the restaurant. Instead, he was at his apartment on New York's Park Avenue. [8] The reason, as the Washington Post described, was that he had "complained of a problem with his skin and the sun. His wife, Klara, demanded that he go to the dermatologist. She even made the appointment, which was scheduled for that morning." Silverstein has recalled that he was "getting dressed to go to the doctor" on 9/11, but complained to his wife: "I have so much to do downtown. This is a horrendous waste of my time. I should be going to work." She retorted, "You're not going to cancel this appointment this morning, you're going to the dermatologist." Silverstein has noted, "When you're married to the same woman for 46 years, you learn early on to say, 'Yes, dear.'" He therefore did not head to the WTC. Referring to these circumstances that saved his life, Silverstein commented, "That morning was the serendipitous quality of life." [9]

LEASEHOLDER'S SON AND DAUGHTER LATE FOR MEETINGS AT WTC
Two of Larry Silverstein's three children, Roger and Lisa, were vice presidents of Silverstein Properties. [10] After the company took over the lease of the WTC, Roger and Lisa Silverstein worked in its temporary offices on the 88th floor of the North Tower and, according to the New York Observer, attended meetings with tenants each morning at Windows on the World. But on the morning of September 11, apparently independently of each other, both of them "were running late." As a result, Roger Silverstein was in the parking garage of WTC Building 7 when the North Tower was hit, and Lisa Silverstein was subsequently turned away from the WTC complex by police further uptown. The New York Observer noted, "If the attack had happened just a little later, [Larry] Silverstein's children would likely have been trapped at Windows" on the World. [11]

LEASEHOLDER'S TOP AIDE ENDS MEETING AT WTC EARLY
An executive with Silverstein Properties who was even more fortunate was Larry Silverstein's top aide, Geoffrey Wharton, who was actually at the 8:30 a.m. meeting at Windows on the World that Silverstein missed. [12] Wharton was meeting with Liz Thompson, the executive director of the Lower Manhattan Cultural Council, to discuss the council's relationship with Silverstein Properties, and its studio and performance programs. Fortunately, as Thompson has recalled, Wharton "had to cut the meeting a little short." [13] And, according to the Engineering News-Record, he then "decided to escort his guest down to the lobby." [14] Consequently, Wharton and Thompson got on an elevator at 8:44 a.m., just two minutes before Flight 11 hit the tower. Only two other individuals were in that last elevator down from the 107th floor: Michael Nestor and Richard Tierney, both senior officials with the New York Port Authority, who were leaving the restaurant because Nestor had a meeting downstairs to attend. The four of them were the last people to make it out of Windows on the World alive. [15]

LEASEHOLDER'S PUBLICIST AGREES TO JOIN MEETING AT WTC AN HOUR LATE
Another key individual who was fortunate not to be in the World Trade Center when it was hit was publicist Howard Rubenstein, who had represented Larry Silverstein for over 30 years and would subsequently work with the real estate developer on the reconstruction of the WTC. [16]

The day before 9/11, Rubenstein was called by John O'Neill, the former FBI counterterrorism chief, who had recently started work as head of security at the WTC. O'Neill invited Rubenstein to a meeting he was going to be leading, which would be held in the WTC at 8:00 a.m. on September 11. It was to discuss how the building's management was protecting the Twin Towers against terrorism. Rubenstein has recalled that O'Neill told him, "Bring your staff, two people."

Rubenstein agreed to attend the meeting, because "we were then representing the World Trade Center." However, after further thought he called O'Neill back and said, "I have a staff meeting on Tuesday, do you mind if I don't go?" O'Neill told him to send a colleague in his place, but Rubenstein replied, "But that somebody is also at my staff meeting." So O'Neill told Rubenstein to "come at 9 o'clock instead of 8 o'clock."

According to Rubenstein, the morning of September 11 he was in the staff meeting when his secretary ran in and told him, "The World Trade Center just got hit and you were supposed to be there." While Rubenstein and his staff members were safe, "Everyone at that breakfast meeting died, including John O'Neill." [17]

COMPANY MEETING IN WTC ON 9/11 CANCELED THE NIGHT BEFORE
Furthermore, Silverstein Properties had been scheduled to hold a meeting the morning of September 11 in its offices on the 88th floor of the North Tower, reportedly "to discuss what to do in the event of a terrorist attack." According to the New York Times, that meeting was canceled the night of September 10, "because one participant could not attend." [18] Further details of the meeting--such as who was meant to be there, and whether any people managed to stay away from the WTC on 9/11 thanks to its cancellation--are unknown.

As we can see, some notable people connected with the WTC leaseholder, Larry Silverstein, appear to have been particularly lucky on September 11. Under slightly different circumstances they may well have been among the victims of the attacks. While their accounts, described above, do not prove anything sinister, the series of apparent coincidences that kept these individuals away from danger on 9/11 surely need to be examined as part of a new investigation into the attacks.