The Actions and Inactions of the Commander in Charge of the U.S. Air Defense Failure on 9/11 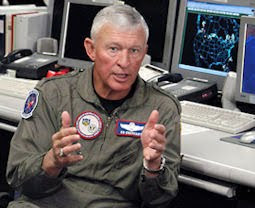 "During those entire 109 minutes ... this country
and its citizens were completely undefended."

General Ralph Eberhart was the commander in chief of NORAD--the military organization responsible for defending U.S. airspace--when the 9/11 attacks occurred. Considering that NORAD failed to intercept any of the four aircraft targeted in the attacks and successfully defend New York and Washington, one would reasonably expect Eberhart to have been somehow held to account. And yet that did not happen.

In fact, nine years on, we still know very little about what Eberhart did while the 9/11 attacks were taking place. From what we do know, his actions seem far from reassuring. Eberhart at least gave the impression of having an unclear picture of what was going on. Accounts of his actions reveal no decisive attempts to respond to the attacks. He appears to have been particularly slow to order a plan that would give the military control of U.S. airspace and get all aircraft grounded. Furthermore, in the middle of the attacks, he decided to drive from his office at Peterson Air Force Base, Colorado, to NORAD's operations center in Cheyenne Mountain--a journey that apparently put him out of the loop for about an hour.

EBERHART'S ACTIONS ON 9/11
Ralph Eberhart began the morning of September 11, 2001 at NORAD headquarters at Peterson Air Force Base. [1] He told the 9/11 Commission that he learned of the crisis that was unfolding when the command director at NORAD's Cheyenne Mountain Operations Center (presumably Captain Michael Jellinek) called at 8:45 a.m.--one minute before the first World Trade Center tower was hit--and "informed him of the ongoing circumstance of a suspected hijacking on the East Coast." Eberhart subsequently went to his office and saw the television coverage of the first attack on the WTC.

He "asked if the aircraft that was suspected of impacting the World Trade Center was the same aircraft that was a suspected hijack, and was told that they were not." Eberhart has recalled that there was apparently "great confusion in the system" at this time. But after news broke of the second attack on the WTC, he said, it was "obvious" to him that there was "an ongoing and coordinated terrorist attack" taking place. [2] And yet his subsequent actions were hardly impressive, considering the urgency of the situation.

Eberhart tried contacting General Henry Shelton, the chairman of the Joint Chiefs of Staff, but was unable to, since Shelton was airborne at the time, on his way to a NATO meeting in Europe. Eberhart then "contacted higher command authority at the Pentagon," he has recalled. [3]

He also spoke briefly with General Richard Myers, the vice chairman of the Joint Chiefs of Staff, who was on Capitol Hill, where he had been meeting with Senator Max Cleland. At some point between 9:03 a.m. and 9:30 a.m., according to Myers's recollection, Eberhart phoned the vice chairman's military aide on his cell phone, which the aide then passed to Myers.

EBERHART UNCLEAR ABOUT DETAILS OF HIJACKINGS AND NORAD'S RESPONSE
Eberhart updated Myers on the crisis, telling him the two WTC towers had been hit and there were "several hijack codes in the system." This, according to Myers, meant "that the transponders in the aircraft [were] talking to the ground, and they're saying ... we're being hijacked." [4] However, if Myers's recollection is correct, Eberhart was apparently either mistaken or deliberately giving false information: None of the pilots of the four flights targeted that morning keyed the code that would indicate a hijacking into their plane's transponder. [5] There should have been no "hijack codes in the system" at that time.

Eberhart told Myers he was working with the Federal Aviation Administration (FAA) to get all aircraft over the U.S. to land. He also said NORAD would be launching fighter jets in response to the attacks. [6] As Myers would recall two days later, "I think the decision was, at that point, to start launching aircraft." [7] However, NORAD's Northeast Air Defense Sector (NEADS), based in upstate New York, had already launched fighters by that time: Two F-15s had taken off from Otis Air National Guard Base in Massachusetts at 8:46 a.m. [8] So if Myers's account is correct, Eberhart--the man in charge of NORAD--was apparently either unaware of the actions of NORAD's Northeast Air Defense Sector or knowingly giving out false information.

Furthermore, when he was interviewed by the 9/11 Commission in March 2004, Eberhart claimed he'd had "no knowledge of the circumstances that initiated the scramble" of fighter jets from Langley Air Force Base in Virginia at 9:24 a.m. [9] Extensive evidence uncovered by the Commission showed that NEADS scrambled those fighters in response to an incorrect report it had received that American Airlines Flight 11--which hit the WTC at 8:46 a.m.--was still airborne and heading south, toward Washington, DC. [10] At the time of his 9/11 Commission interview, Eberhart said, he had only "recently" been made aware of these circumstances. [11] How could the man in charge of NORAD on September 11 have been unaware of such crucial information for nearly two and a half years after the attacks occurred?

After learning of the attacks in New York, Eberhart stayed at Building 1 at Peterson Air Force Base--the headquarters of the Air Force Space Command, which, as well as NORAD, he was the commander of--because, he said, "he did not want to lose communication." [12] However, he soon set out on a journey that caused him to lose communication with others involved in the emergency response for 45 minutes or longer.

EBERHART OUT OF COMMUNICATION WHILE TRAVELING TO OPERATIONS CENTER
At "approximately 9:30," according to his own recollection, Eberhart left Peterson Air Force Base and headed to the NORAD operations center in Cheyenne Mountain. [13] The operations center was about 12 miles away, a journey that takes "roughly 30 minutes," according to the 9/11 Commission Report. But, as the Washington Post noted, "The trip to Cheyenne Mountain can be time-consuming if traffic is bad," and the drive took Eberhart 45 minutes. [14]

The journey may in fact have taken even longer. Eberhart told the 9/11 Commission that by the time he arrived at the operations center, the authorization for the military to shoot down threatening aircraft had been passed down NORAD's chain of command. NORAD finally passed on this authorization to its three air defense sectors at 10:31 a.m., which would imply that Eberhart reached the operations center shortly after that time, more than an hour after he said he left Peterson Air Force Base. [15]

Furthermore, while he was making the journey to Cheyenne Mountain, Eberhart "couldn't receive telephone calls as senior officials weighed how to respond," according to the Denver Post. [16] He reportedly "lost a cell phone call with Vice President Dick Cheney." The reason why Eberhart had problems receiving phone calls is unclear, though it has been reported that "New repeater stations were installed almost immediately" after 9/11, "to fix the phone problem." [17]

During the period when he was reportedly traveling to the operations center, at 9:49 a.m., Eberhart "directed all air sovereignty aircraft to battle stations, fully armed" over the Pentagon's air threat conference call, according to the 9/11 Commission Report. [18] Presumably he was either able to successfully issue this order himself despite his communication problems, or the order was issued on his behalf by a subordinate who was participating in the air threat conference call. However, when an aircraft is at "battle stations," its pilot is in the cockpit, but with the engines turned off, ready to start them and taxi out only if a scramble order should follow. [19] So Eberhart's order would have meant that any air sovereignty aircraft not already airborne would have remained on the ground, rather than immediately getting into the air, where they could have quickly intercepted a hostile aircraft.

The reason Eberhart decided to relocate to Cheyenne Mountain at such an important time, when his uninterrupted participation in the crisis response would presumably have been essential, is unclear. According to the Colorado Springs Gazette, the Cheyenne Mountain Operations Center "had communications capabilities not available at Peterson." [20] And Eberhart told the 9/11 Commission that, on his communications loop, it had "quieted down" before he decided to head out to the mountain. [21]

All the same, if Eberhart's account of his actions is correct, it would mean that, in the middle of the worst terrorist attack in the history of the U.S., the commander of NORAD was, at least to some degree, out of the loop for maybe an hour or more.

MILITARY ONLY TAKES CONTROL OF SKIES AFTER ATTACKS ENDED
The one key action Ralph Eberhart is known to have taken in response to the 9/11 attacks was to implement a modified version of a plan called "SCATANA," which would clear the skies and give the military control over U.S. airspace. However, Eberhart only ordered that this plan be put into operation at around 11:00 a.m., about two hours after the second WTC tower was hit and it became "obvious" to him that a coordinated terrorist attack was taking place.

When he was asked before the 9/11 Commission why it had taken so long to initiate the plan, Eberhart recalled that people had been approaching him and telling him to "declare SCATANA." However, he added, NORAD "could not control the airspace that day with the radars we had and all the aircraft that were airborne. ... So, if I suddenly say, 'We've got it, we will control the airspace,' we would have had worse problems than we had that morning because I cannot provide [air] traffic deconfliction like the FAA has."

Eberhart therefore requested that a modified version of SCATANA be devised, telling those that were calling for the plan, "I will execute SCATANA once you have a modified SCATANA that clearly delineates the lines in the road and doesn't cause a bad situation to become worse." The modified SCATANA that Eberhart subsequently implemented allowed navigational aids to stay on, and selective approval for specific and necessary flights. [22]

Eberhart was implying to the 9/11 Commission that his delay in ordering SCATANA was due to the time required to put together this modified version of it. However, he has not specified the time at which he asked his colleagues to start preparing the modified SCATANA. Was it at 9:03 a.m., when the second WTC tower was hit and everyone realized that the U.S. was under attack--a time when the value of such a plan would presumably have been obvious? Or was it later on? If later on, how much later?

AMERICA 'COMPLETELY UNDEFENDED' DURING ATTACKS
A fuller analysis of Ralph Eberhart's actions on September 11 will only be possible when more evidence comes to light revealing what he did at the time of the attacks. It seems remarkable that we still know so little about the actions of the man who, as commander of NORAD, was in charge of the air defense of the U.S. In that role, Eberhart oversaw a catastrophic failure, which, in the words of Senator Mark Dayton, meant that for "109 minutes ... this country and its citizens were completely undefended." [23]

And yet, rather than being held accountable, or even just criticized, for that failure, in October 2002 Eberhart was put in charge of the newly created Northern Command (NORTHCOM), described as "the nation's premier military homeland defense organization," which had the mission of countering threats and aggression against the United States. [24]

As Dayton concluded, "The situation is urgent when we do not get protected in those circumstances [that occurred on 9/11], and it is even worse when it is covered up." [25]

Can this be interpreted as a "stand-down-order"? Did the fighters already in the air have to be grounded (Otis, Langley)? Why not?