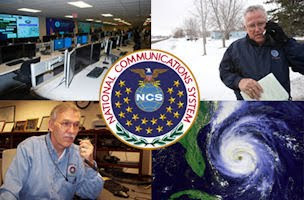 A special backup network that allows communications between government and military agencies to continue during emergencies was "miraculously" switched on the day before 9/11, and so was already operational when the terrorist attacks in New York and at the Pentagon took place. The Special Routing Arrangement Service (SRAS) was, for reasons unknown, turned on for "exercise mode" on September 10, 2001, and was therefore ready to be utilized the following day, when there was a national emergency like that for which it was intended.

The SRAS is the responsibility of a little-known government agency called the National Communications System (NCS), which works to keep critical telecommunications functioning during emergencies and played a crucial role in the government's response to the 9/11 attacks, helping to maintain and restore communications networks. Furthermore, the SRAS is related to "Continuity of Government"--a plan that was activated for the first time during the attacks.

SRAS TURNED ON FOR 'EXERCISE MODE' ON SEPTEMBER 10
Brenton Greene, the director of the NCS on September 11, told the 9/11 Commission that on September 10, 2001, "miraculously, the SRAS system was turned on for exercise mode and thus it was ready to function on September 11." Therefore, when the NCS was required to assist the government's response to the terrorist attacks, the "SRAS was already in exercise mode and operational." [1]

The SRAS supports the highly secret Continuity of Government (COG) plan, which is intended to keep the government functioning in the event of an attack on the U.S. [2] The NCS's involvement in COG was one of the agency's three main programs. As Greene told the 9/11 Commission, "The main communications system of the country must be kept going or no one can communicate." [3] The SRAS provides "a vehicle for continuity of operations by providing survivable communications linkages to federal and defense end users over the public network," according to a Department of Homeland Security publication. [4]

Apparently describing the SRAS, Greene told the 9/11 Commission, "There is a separate network linking the National Coordinating Center and the major carriers and networks as a backup." (The National Coordinating Center, in Arlington, Virginia, is the "operational arm" of the NCS.) This network "proved its value as a separate link on 9/11 because it coordinated network use between Network Operations Centers while the [telecommunications] network was saturated." Furthermore, again apparently describing the SRAS, Greene said, "In the situation where Continuity of Government is put into play"--as was the case on September 11--"there is a communications system where no one can trace the site of the call on either end." [5]

WAS THE NCS INVOLVED IN A TRAINING EXERCISE ON SEPTEMBER 11?
Greene apparently did not tell the 9/11 Commission why the SRAS was turned on for "exercise mode" on September 10. But a possible explanation that needs to be investigated is that the NCS was scheduled to participate in a training exercise on September 11. We know that the NCS was, in 2001, part of the Department of Defense. [6] And several U.S. military agencies are known to have been conducting exercises on the morning of September 11. For example, the North American Aerospace Defense Command (NORAD) was running its annual exercise, "Vigilant Guardian," [7] and the United States Strategic Command (Stratcom) was holding its annual exercise, "Global Guardian." [8] Might the NCS have been participating in one of these, or another exercise?

Furthermore, it is worth noting that beginning at 8:00 a.m. on September 11, representatives from the CIA gave a briefing to the NCS at "a secure facility outside of Washington, DC," where they discussed the threat that international terrorists posed to America's telecommunications infrastructure. Along with Brenton Greene, the briefing was attended by representatives from seven other federal agencies and more than 40 technology and communications companies. The private sector representatives were all "senior executives from their respective companies, and all had government security clearances that granted them access to the most sensitive intelligence data" relating to threats to the nation's telecommunications infrastructure, according to journalist and author Dan Verton. Topics discussed during the briefing included the growing terrorist threat to the telecommunications infrastructure, the information warfare capabilities of foreign nations, and the possibility of a strategic cyber-attack on critical U.S. infrastructures, committed by a foreign nation or a terrorist group. [9]

Considering that the NCS's Special Routing Arrangement Service had been switched on for "exercise mode" the previous day, and considering the topics that were discussed, might this briefing have been an introduction for a training exercise, perhaps preparing participants for a scenario based around a simulated attack against the telecommunications network?

CONTINUITY OF GOVERNMENT WAS ACTIVATED FOR THE FIRST TIME ON SEPTEMBER 11
Continuity of Government is a program dating back to the cold war, which aims to ensure that the government will continue to function in the event of an attack on the United States. During the 1980s it prepared for a possible nuclear attack by the Soviet Union, but during the 1990s it focused instead on the possibility of a terrorist attack in the U.S.

Considering that the SRAS supports COG by "providing survivable communications linkages to federal and defense end users," it is worth noting that sophisticated communications methods have played an important role in the COG program. In the 1980s, for example, much of its budget of hundreds of millions of dollars "was spent on advanced communications equipment that would enable the teams [involved in COG] to have secure conversations with U.S. military commanders," according to journalist and author James Mann.

Furthermore, three of the program's key players during the 1980s and 1990s held critical positions in the U.S. government on September 11. Those individuals--Dick Cheney, Donald Rumsfeld, and Richard Clarke--were the vice president, secretary of defense, and White House counterterrorism adviser, respectively, when the attacks occurred. [10] David Addington, Cheney's legal counsel in 2001, was also involved in the COG program. [11]

It is also notable that the COG plan was activated, apparently for the first time, during the 9/11 attacks. Richard Clarke has said that he gave the order to activate it, apparently at around 9:45 a.m. on September 11, or shortly after. [12] He told ABC News: "On the morning of 9/11, the entire Continuity of Government program was activated. Every federal agency was ordered ... to activate an alternative command post, an alternative headquarters outside of Washington, DC, and to staff it as soon as possible." [13]

Considering that the SRAS is intended to support the COG program, it was convenient, to say the least, that it was already operational on September 11 and therefore immediately ready to be utilized by those involved with COG when the plan was activated.

NCS'S CRITICAL RESPONSE TO THE 9/11 ATTACKS
The National Communications System, which is responsible for the Special Routing Arrangement Service, is a relatively small agency that was established in 1963, in order to provide better communications support to critical government functions during emergencies. [14] Around the time of the 9/11 attacks, it consisted of 22 federal agencies, 100 full-time civilian employees, and 10 military employees. [15]

The NCS played a critical role following the 9/11 attacks, when the destruction caused by those attacks became what Brenton Greene called "the most significant challenge that the National Communications System had ever seen." [16] In partnership with private companies, it "quickly assembled an unprecedented level of resources at the national, state, and local levels to support the response and recovery efforts."

Presumably, the NCS's emergency efforts benefited from having the SRAS already operational when the attacks took place. As previously mentioned, the SRAS is related to the Continuity of Government plan. Notably, in response to the attacks, the NCS's National Coordinating Center operated at four sites, which included a "remote continuity of operations location." [17] And Greene has said he went to his "Continuity of Government site," where personnel operated around the clock to monitor the status of the telecommunications network, and coordinate priorities and repairs. [18]

GOVERNMENT AGENCIES EXPERIENCED COMMUNICATIONS PROBLEMS ON SEPTEMBER 11
So little has been reported about the National Communications System and the Special Routing Arrangement Service, and the role played by each on September 11, that many crucial questions remain unanswered. For example, what capabilities did the SRAS enable? And what use was made of them on September 11, before, during, and after the attacks took place? Why was the SRAS turned on for exercise mode the day before 9/11?

The need for investigation of the roles of the NCS and the SRAS appears increasingly urgent in light of the fact that communication difficulties were a significant problem for government agencies responding to the 9/11 attacks. Indeed, one classified after-action report "does not paint a favorable picture of the government's overall crisis management capabilities," according to Dan Verton. One government official said "the nation was 'deaf, dumb, and blind' for much of that horrible day in September." [19]