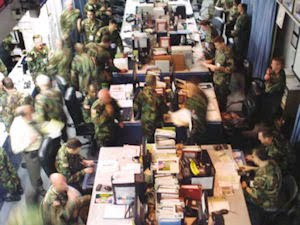 Army officers at the Pentagon were planning a training exercise that would take place less than a week after 9/11 and that would, extraordinarily, be based around the scenario of a plane crashing into the World Trade Center. Preparations for the exercise were being made about a week before September 11.

The existence of the planned exercise was revealed by Major General Peter Chiarelli, who on September 11, 2001, was the Army's director of operations, readiness, and mobilization. In that position, which he had moved into about a month before 9/11, Chiarelli was in charge of current operations in the Army Operations Center (AOC) at the Pentagon.

Chiarelli recalled in a February 2002 interview that, after beginning his new position, he had "planned to do an exercise for the Crisis Action Team, the CAT." He said, "In some of my pre-briefings, in learning about the job, it was briefed to me that the Crisis Action Team had not stood up, except for an exercise, in about 10 years in any great role." He therefore had members of his staff design a CAT exercise that, he said, he planned to run on September 17. [1]

SCENARIO FOR MASS CASUALTY PROCEDURE WAS OF A PLANE HITTING THE WTC
Chiarelli also recalled in the interview that the Personnel Contingency Cell in the AOC had been tasked with putting together a new mass casualty standard operating procedure (SOP) for the Army. About a week before 9/11, Chiarelli said, a colleague of his--"Robby Robinson"--and two other officers "came in to brief me on their new SOP for mass casualty."

During the meeting, it was decided that in the CAT exercise Chiarelli was going to run, "we would go ahead and use this SOP as a kind of exercise driver." Chiarelli recalled, "The real amazing thing of that SOP is that the scenario was an aircraft crashing into the World Trade Center." Chiarelli told the others in the meeting, "Hey, not only is this a good SOP and a good plan, but at the same time, to really make this good, what we need to do is exercise it." According to Chiarelli, "We decided that we would use a scenario similar to that to drive this exercise" that he was planning. [2]

Chiarelli did not specify in his February 2002 interview what type of aircraft was envisaged hitting the WTC in the scenario. Nor did he say whether it would have been a hijacked plane or one that crashed into the WTC accidentally. But what his account means is that, in the days before the terrorist attacks in New York and at the Pentagon occurred, a military exercise was being planned that was scheduled to take place less than a week after September 11, with a scenario that was identical--or at least extremely similar--to what happened in New York on 9/11.

The possible significance of Chiarelli's training exercise being based around a plane crashing into the World Trade Center will need to be determined by a new and unrestrained investigation of the 9/11 attacks. However, the odds of this being due to chance, and unrelated to what happened on September 11, must be minute.

ARMY OPERATIONS CENTER AND CRISIS TEAM PLAYED IMPORTANT ROLES ON SEPTEMBER 11
The AOC that Chiarelli was in charge of is located in the basement of the Pentagon, two levels beneath a parking lot. It plays an important role within the Army. Reportedly, "Critical information flows through the high-security worksite, with AOC personnel--almost all in uniform--working day and night to keep senior Army leaders aware of issues and events around the world, helping them make timely, critical decisions." Chiarelli described the AOC as "the Army's command and control center." [3] On September 11, senior Army leaders assembled there in response to the terrorist attacks.

The Crisis Action Team, whose members were going to participate in Chiarelli's training exercise, was activated in response to the attacks on the WTC. Chiarelli said at the time that he had activated it "to respond to the contingency in New York if requested by state and local officials." He said he "anticipated that the World Trade Center disaster would require enormous rescue, firefighting, and recovery efforts." [4]